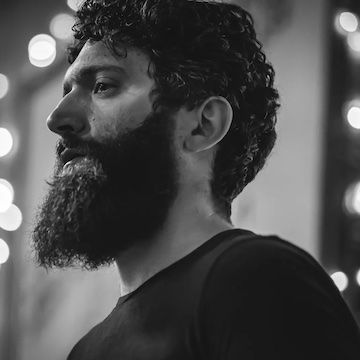 Trumpeter Cyrus Nabipoor would be forgiven for shedding a few tears. The last couple of years have been difficult for the 28-year-old musician, from the loss of income and focus due to the ongoing COVID pandemic to some serious personal hardships including a bout with cancer that necessitated the removal of two internal organs and a loved one receiving a diagnosis of bipolar disorder.

The trouble is that Nabipoor can’t cry at sad or difficult things in his life. His body somehow won’t allow it.

“I can cry for happy stuff, no problem,” he said recently as he strolled through his neighborhood. “I’m super susceptible to crying at a wedding. I just cried at my own wedding very recently. But when you would think that you should be crying out of grief or frustration, it doesn’t happen.”

This inability to cry during the hard times in life was at first concerning, but it has since become a source of inspiration. Before the year is out, Nabipoor will be heading to the studio with a handful of trusted collaborators, including tenor saxophonist / clarinetist Leon Cotter and drummer Micah Hummel, to record his debut album as a bandleader, In Lieu of Tears.

This new collection of music became Nabipoor’s conduit for processing the torrent of emotions that came with his health issues and that of his close loved one. As well, these tunes find the trumpeter coming to embrace the more accessible side of his writing and playing.

“I used to try and avoid a lot of the pop and rock tendencies that I didn’t really know how to integrate into the instruments that I wanted to write for,” he says. “But as I’ve learned to accept myself and all of my unique influences and lead them into my writing — to use them as a strength.”

Anyone who has followed Nabipoor’s career shouldn’t be surprised to know how unafraid he now is to write more approachable fare. Since his days coming up through the Alan Jones Academy of Music, the Portland native has been a versatile and enthusiastic player within the local scene. Fresh out of high school, he helped found The Wishermen, an ensemble of fellow AJAM students that played jazz with a psychedelic bent. Later, Nabipoor moved to New Orleans where he found steady work by being able to slip from the traditional high-stepping sound of the city to post-bop and beyond with ease.

Since his return to Portland, Nabipoor has remained musically flexible. He’s a regular at The 1905, either leading his own ensemble or joining in with Chris Shuttlesworth and his mentor Jones. (Nabipoor will be performing at the club this Sunday, August 28 with two shows at 7 and 9:30 pm. Both sets are helping raise funds to record In Lieu of Tears.) Nabipoor also collaborates frequently with the Creative Music Guild, the long-running arts organization celebrating avant garde sounds.

In fact, his willingness to keep looking forward is lending some urgency to the upcoming sessions for Lieu.

“I have a strong sense that I’ve reached a point that should be documented before I move on to the next thing,” Nabipoor says. “If I wait too long, I’m gonna start writing in a different way, and then I’ll have missed the chance to document this chapter.”