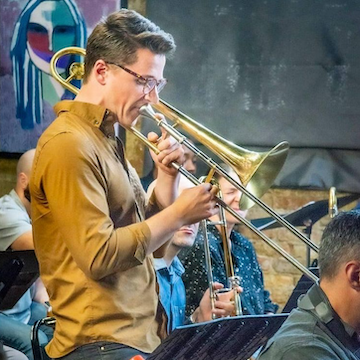 In Ken Burns' documentary Jazz, bassist Charlie Haden remembered the conversations he and Ornette Coleman would get into about the radical sound they were developing in the early ’60s: "We used to talk about it as playing music as if you've heard music before." A bold idea for its time that polarized the artists and listeners that encountered it. To twist Haden's statement a little, listening to what Coleman performed throughout his storied career makes it almost impossible to hear music the same way ever again. Albums like Song X, his collaboration with Pat Metheny; Skies of America, his 1972 modern classical work; or the Pulitzer Prize-winning Sound Grammar seem to be dramatically rearranging the structure of sound — from the music coming out of the speakers to the ambient noise of the world — in real time.

When trombonist Chris Shuttleworth and an ensemble made up of drummer Matt Mayhall, bassist Andrew Jones, and saxophonist Tim Willcox take the stage at No Fun tonight to perform two sets of Coleman's music, expect to feel the air in the room shift and move like the incoming tide. This quartet of strong local players are steeped in Ornette's discography and plan on diving into it with only fragments of a map to guide them. We caught up with Shuttleworth as he drove to the coast on Easter Sunday to get a sense of his history with Coleman's music and what he has in store for tonight's gig.

What can you tell us about when you hit on the idea of putting this show together?

I had a very weird introduction to Ornette. I think a lot of people that came up through a traditional music education setting end up with this strange introduction to his music because he's such a divisive figure in jazz history. A lot of people feel like, "Oh, he's a fraud. It's just noise." There's the famous story of Max Roach hearing him play and then punching Ornette in the mouth, or Miles Davis writing him off as nothing. So when I was growing up, I got the example of, "Here's Ornette Coleman doing this free jazz thing," and they put on the recording that was literally called Free Jazz. Or it might have been some of the stuff on Song X. Stuff that's immediately up to 100 or really abrasive where he's playing violin. The evolution of how it got to that point wasn't made apparent.

I had sort of written him off until I moved to Chicago — I was living there for about 10 years before I moved to Portland. Chicago has a beautiful and really deep history of improvised music, especially free improvised music and variants thereof with the influence of the AACM. So when I was in Chicago, I was seeing all these artists that I really looked up and thought, "Oh, this is the music that's moving me." People like Matt Gold or Dustin Lorenzi or Greg Ward, Geof Bradfield, Nick Mazzarella. Right around the time Ornette died, all of those people were playing their gigs and going, "Here's 10 of my originals and then we're gonna do two Ornette tunes." It was like a switch flipped in me. Maybe I just didn't give this guy the credit he deserves because all these people that I really look up to are heavily influenced by him.

I went on a deep dive, and I realized Ornette's music really scratches this itch for me of being just liberated enough from standard procedure for me. Some of the constraints of traditional harmony or traditional rhythm fall apart and becomes this very organic group thing that I think is very moving. Coming to Portland, I started meeting people who fall on the same side of the Ornette devotee camp. Matt Mayhall, who's playing drums on the gig, being one of them. I thought, "What a great opportunity to book something in a really cool space like No Fun and go really deep in the study of this music and put it together and go on that adventure with great musicians in town.

Have you been rehearsing Ornette's material pretty heavily leading up to the show?

Me and Tim have gotten together for it, just to get the horn section together. But I think everyone knows the stuff front and back anyways. We're going to get the excitement factor out of it. I think it will be great. There's another Ornette-centric group from New York called Broken Shadows, which is Dave King, Chris Speed, Reid Anderson, and Tim Berne. Their approach is like, "We've all been moved by this music over the years and we thought it would be wonderful to do a record and a tour. The only rules are no one can ever bring a chart on stage, and we're not going to rehearse." We all know the recordings. We're just gonna lay it all on the court. The way that Tim and Andrew are so eager to make music together with you. Everyone is so in there immediately from the first moment to the last moment. Everyone is tuned in on this super high level and so supportive. It's like this machine that works great.

As you finally gave yourself over to Ornette's music, what became your favorite recordings of his?

Science Fiction by a wide margin. We're not actually going to touch a lot of that music for this gig. We're focusing more on Ornette's first few records like Something Else and The Shape of Jazz To Come that are a little more be-bop influenced and are a really cool exercise in small deviations from standard form. To use "The Sphinx," for example. That's basically "I Got Rhythm" in a weird key and a bunch of the sections have one extra beat in the middle of them. There's a bunch of that all over his catalog where there's an extra beat or an extra bar or some twisted little bit. We're gonna cover a lot of that stuff, and we'll dive into the future and pull some Science Fiction. That album is the North Star for me, out of Ornette's catalog.

Congeniality: The Music of Ornette Coleman takes place at 7 pm on Tuesday April 19 at No Fun (1709 SE Hawthorne). $8 - 10 at the door. Proof of vaccination required for entry.