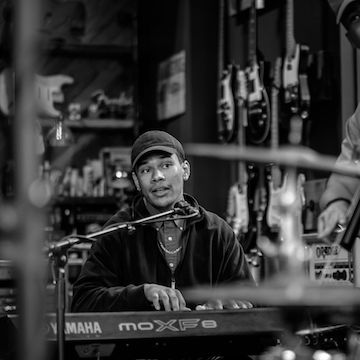 When friends and frequent collaborators Thara Memory and Ken Berry dreamed up the Creative Jazz Orchestra in the late ’70s, their concept was simple: to keep Portland’s many jazz players playing.

“It was basically to get all these musicians together from every walk of life,” Berry remembers. “Our emphasis was on getting those folks whose craft was superb, but didn’t have any way to show it because in order to play in a lot of venues, you had to be unionized. We made sure their union dues were paid and got them all into one situation.”

This free-ranging ensemble, which included contributions over the years from local artists like Dave Mills and Obo Addy, cast a wide musical net that developed into a concept known as Time Sound. Posters for the group’s debut performance in 1981 at the Civic Auditorium (now Keller Auditorium) promised everything “from primitive drum beats, big band sounds to the sounds of the ’80s and beyond?” Or as Berry put it, “Thara’s goal was to try to do everything music-wise, from African drum beats to Tchaikovsky.”

While the Creative Jazz Orchestra and their Time Sound performances only lasted until around 1989, their spirit has carried forward through the still-thriving jazz community in Portland. And, for at least two nights, it is being brought back to life with the help of some of the city’s abundant pool of younger musicians.

Closing out the 2022 Cathedral Park Jazz Festival this coming Sunday will be a performance dubbed Time Sound: Albina’s Jazz Reimagined. Anchored by a set from greaterkind, the funk-jazz trio featuring keyboardist Charlie Brown III (pictured above), drummer Cory Limuaco, and guitarist Peter Knudsen, this version of Time Sound will, as Brown puts it, “walk a generational line.”

The gig on Saturday July 16, which includes contributions from drummer Domo Branch, trumpeter Noah Simpson, and several special guests, will include a medley of material pulled from the vast archives of Albina Music Trust (AMT), the nonprofit that has been restoring and re-releasing live and studio recordings by groups that played regularly in clubs and theaters throughout North and Northeast Portland.

“A lot of these artists were just making demos to get gigs,” says Bobby Smith, AMT’s co-founder, “so some of the songs that are going to get played may never have been played on stage before. Or they just haven’t been heard in 40 years.”

The closing show of the festival will also pay tribute to the foundational Portland artists. Thara Memory’s daughter Tahirah will be playing a set of originals, as will vocalists Arietta Ward, the daughter of pianist Janice Scroggins, and Lauren Steele, the daughter of LaRhonda Steele.

The shadow that will be looming largest on the entire evening is that of Thara Memory. Beyond the creation of Time Sound, the trumpeter and educator who passed away in 2017, committed much of his energy to teaching jazz to young people in Portland, including Brown and Branch.

“This program means a lot to me because of what Thara meant to me,” Brown says. “I was his student for a long time — from when I was in sixth grade to even past high school. He was like a second father, so just being in this realm of everybody he’s worked with and having Tahirah on the program is just surreal. I’m juiced about it.”

Following the Cathedral Park Jazz Festival showcase, an expanded version of Time Sound: Albina’s Jazz Reimagined will be held at the Washington Park Rose Garden on August 6th at 7 pm. And there are plans afoot to release a Time Sound album through Albina Music Trust this fall.