If any Portland musician deserves a TED Talk, it’s Christopher Brown. Aside from his impressive biography—son of Portland drum hero Mel Brown, acclaimed drummer in his own right who spent years on the New York jazz scene, and military veteran to boot—Brown is a formidable strategist and thinker who has made it his mission to uplift others with his ideas about life, art, and community. Since moving back to Portland in 2012, he’s established himself as an essential fixture of the scene, leading his own quartet and playing and teaching throughout the state. On Thursday, April 8, he’ll be bringing his band (John Nastos, Greg Goebel, and Ross Garlow) to the Botanist for the JSO’s Jazz Makers series. JazzScene caught up with Brown for a sprawling conversation about music, life, and why he’s excited to be in Portland. 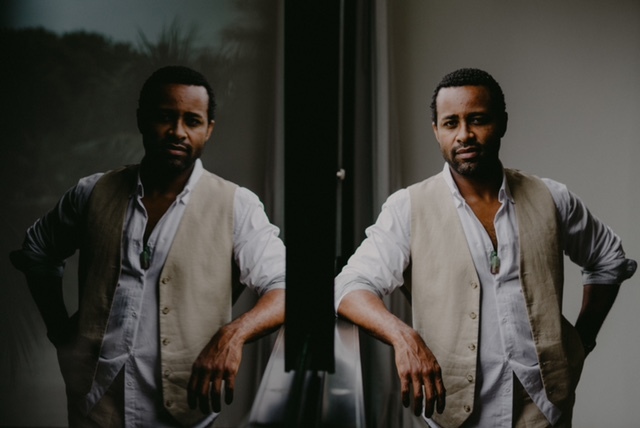 JazzScene: Your band has been playing together for almost as long as you’ve been back in Portland. How has the group evolved over the years?

The quality of your doing is always going to be predicated on the quality of your being, because we spend more time being that we spend doing. The more we develop ourselves as human beings, then the easier it is for us to be able to make smarter choices when it comes to whatever it is that we engage our time in.

I've tried to be a model for my guys with regard to intentional growth. I’m trying to be visual in how I’m growing, and talking about it constantly on social media in the hopes that it will create a set of conversations where people go, “I should probably ask Chris about this thing he just posted and what his thoughts are.” I literally force this conversation about growth, intentional growth, and leadership with everybody that I talk to.

JS: What motivates you to be such an instigator of these kinds of conversations?

CB: Our feet go toward what our eyes can see. What our eyes can see is an environment. For me, the environment looked like the people I started hanging out with, and the people I started  hanging out with were business owners. I started looking at the quality of life that they have and comparing that to the quality of life that I get to live, and I think I like what I see on the other side of this fence. From there that opens up a whole pathway or a doorway to just ask a different set of questions. You can’t get the answers you want unless you know what relevant questions to ask. So where do the questions come from? The questions come from experiences. When you’re a business owner, you have to care about growth. Because you don’t go into business to not grow. So that means you always have to be one step ahead of your employees, because the leader sets the tone for the rest of the organization. So I want my guys to see me lusting after growth and improvement, and I hope they’ll want to do the same thing. It really has to do with me seeing a different quality of life and asking myself, how do I bridge the gap from where I am to where they are? The thing I started to realize is that the quality of your doing is reflective of the quality of your being, so the first thing you have to invest in is yourself. Because if your professional accomplishments outpace your personal growth, that to me is akin to a person who’s doing a handstand. Eventually you’re going to collapse under your own weight.

JS: How has the past year been for you? Is there anything you’ve mourned or been pleasantly surprised about?

CB: The thing that kills any business is anonymity. You’ve got to be networking and creating relationships all the time. The world shut down in March of last year, and by early May I got a phone call from the owner of Tavern on Kruse in Lake Oswego. I had already played at his place a few times and had cultivated a decent relationship with the guy, so he hits me up and goes, “I’ve got my PPE money and I’ve got a surplus, and I have two weeks to blow through it, so I might as well hire some of my favorite musicians to perform at my venue.” So the next thing you know, we’re playing there three or four times a week. We ended up cornering the market in Lake Oswego because no other place was open. It became such a thing that people started showing up specifically for the music, so he was like, “Let’s ride this thing until the wheels fall off.” So that went from late May to early November, and the only reason why the wheels fell off was that it was physically too cold to play outside. But in that amount of time, other people started to catch on, so we ended up getting a regular gig at Amalfi’s, and now we’re playing there once a week. So within a pandemic we ended up having three to four steady gigs a week, consistently, from May throughout November. And then also we started setting up cul-de-sac gigs. We said, let’s just set up gigs in people’s cul-de-sac, because all the social distancing you could possibly want is there and you're at your own home. The music is coming to you, just like Art Blakey and the Jazz Messengers, those guys traveling the world bringing music to everybody. So we’ve figured out a way of manufacturing our own gigs. And it’s a great way of bringing community together, because that's the one thing people have been missing. We were busier throughout the pandemic than we have been in three to four years prior.

JS: Now that things are starting to open up, what are you excited about or looking forward to?

CB: There’s a new nonprofit that just got started with a few folks here in town called Upper Structure. And the concept of this is to create new tributaries of funds that ends up lessening the financial burden of any venue to have to pay musicians, but it also allows them to be able to offer musicians a higher base guarantee. Because the live music model in itself was kind of on its last leg anyway. If you think about it, the battlefield for jazz music, or any live music situation, is small venues. But if they’re having difficulty being able to compete with all the other businesses in regards to getting bodies in their spaces, then that lowers the amount of money that they have left over for a band. And then you’re in a situation where the band is just high-level busking. So this is a way to scratch that itch from both sides, both for the venues as well as for musicians. The goal is to try to gather as much support from big businesses so it allows them an opportunity to improve the optics of their operations in regards to their involvement in the community. This would allow us to be able to not only solve the money problem both for the venues and musicians, but also to give us the capital to be able to create, maybe, a jazz camp or a jazz festival, or to be able to create artist development type deals, especially for people who are about to leave school, so that they feel like they are being trained in a way where the skill set they are developing before they launch themselves into “adulthood” is actually relevant to the world that they are going to have to navigate.

JS: You’ve now been back in Portland for almost a decade. How are you feeling about the city?

CB: Honestly, I'm excited. I’ve been saying that ever since I moved back to Portland in 2012, but it’s been amplified that much more since I've developed a higher-level business model. I’m excited about being able to put into practical use the things that I've learned over so many years. I decided I was going to be a jazz musician when I was 12 years old; I wanted to contribute to the lifeblood and preservation of jazz music. I had no idea what that would look like but it at least gave me a direction to go towards. So now that I've got these more dialed-in ideas, I now have a better sense of where all the pain points exist for us as musicians as well as business owners, so I'm looking forward to being able to have fun solving problems.

I feel like jazz music—the culture, not the music—here in Portland really saved my life growing up. I was kind of like a ship without a sail, not knowing what end was up or what blueprint I should be following. So once I made the decision that I wanted to be a professional jazz musician like my dad, that meant that now I should probably hang around jazz musicians who were better than me. That led me to Ron Steen’s ecosystem and the community that surrounds him. So now I'm in a different growth environment where it’s me and all adults, not just my friends at school. I’m getting a chance to see how adults move, how they walk, how they talk, how they dress, what they care about. That leveled me up very quickly, because I was now in a different environment. Because it helped me, I want to be able to do the same thing for others. Because this music’s larger than me. It only makes sense that I would pay it forward for someone else the way it was paid forward to me.

The Chris Brown Quartet plays the Botanist on Thursday, April 8 at 5pm. Get tickets here.