Shelly Rudolph - "The Way We Love" 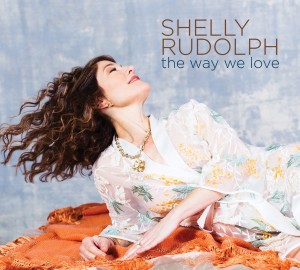 It may come as a surprise to some Oregon listeners that Shelly Rudolph’s last album came out over 15 years ago. On that release, 2005’s Water in my Hand, the Portland singer and songwriter laid her powerful but sensitive vocals over a tight rhythm section complete with electric guitar and crisp drums. So if you haven’t been paying attention to Rudolph’s artistic evolution in the years since, her new record, The Way We Love (OA2 Records), might come as a bit of a shock. In lieu of a traditional rhythm section, Rudolph has recruited cellist David Darling, who offers a variety of textures, some light and some dense. Rounding out the sound is a parade of well-known pianists—including Darrell Grant, David Goldblatt, David K. Mathews and Rudolph’s frequent collaborator Tom Grant—as well as a few other acclaimed Portland guests. The result lends a startling, hushed intimacy to this collection of beautifully arranged jazz-pop ballads mostly composed by Rudolph herself.

Things start off somewhat conventionally with some groovy interplay between bassist Dave Captein and guitarist Chance Hayden on the intro to “Close Enough.” But halfway through the smoky 6/8 number, Darling’s cello enters—or rather, his cellos, overdubbed several times to paint otherworldly colors behind Mathews’s bluesy piano and Rudolph’s buoyant delivery of the melody. Darling’s work is never heavy enough to become distracting, and it makes for a refreshing addition to the classic soul sound of the piece.

Elsewhere on the album, the cello serves to heighten some of the album’s more experimental aspects. The title track, for instance, is a full-on spoken-word piece, with Rudolph comparing humanity to pastries over a thick choir of multi-tracked cello. And on a dreamy rendition of the Ben E. King standard “Stand By Me,” rendered ethereal by Hayden’s sweeping guitar chords, Darling becomes a one-person percussion section, lending crunchy emphasis to the song’s signature rhythmic hits.

When the album’s other guests appear, they somehow both steal the show and fit seamlessly into the album’s meditative mood. Vocalist Redray Frazier is the most prominent of these collaborators, his silky voice sharing the duet spotlight with Rudolph on a gentle cover of Chris Pierce’s “The Slow Life.” Devin Phillips’s soprano sax is also a welcome presence; on the album’s closer, “Calling Me Home,” he weaves percussive statements over Darrell Grant’s gospel piano, and he takes a swooning turn on the simmering ballad “Faith.” The latter is one of several Norah Jones-esque moments on the album, though Rudolph traverses deftly from Jones’s softly soulful style into a more forceful mode at the song’s climax.

Chance Hayden only appears on four tracks, but he co-produced the album with Rudolph (and also happens to be her husband), and the variety of tones he adds throughout the album add just the right amount of atmosphere and arrangement to the compositions. Ultimately, though, this is Rudolph’s project, and it is the perfect sonic showcase not only for her versatile singing voice but also for her songs, a varied collection united by a fresh and powerful romanticism.

Buy The Way We Love here via OA2 Records