Review by Tree Palmedo, Feb 28, 2021—Though the widespread pandemic narrative in the jazz world has been one of hardships, cancellations, and long-term uncertainty, there are always upsides. Venues, nonprofits and other presenting organizations have spent the past year innovating various unconventional methods of keeping themselves—and the music—alive, often to surprising success. 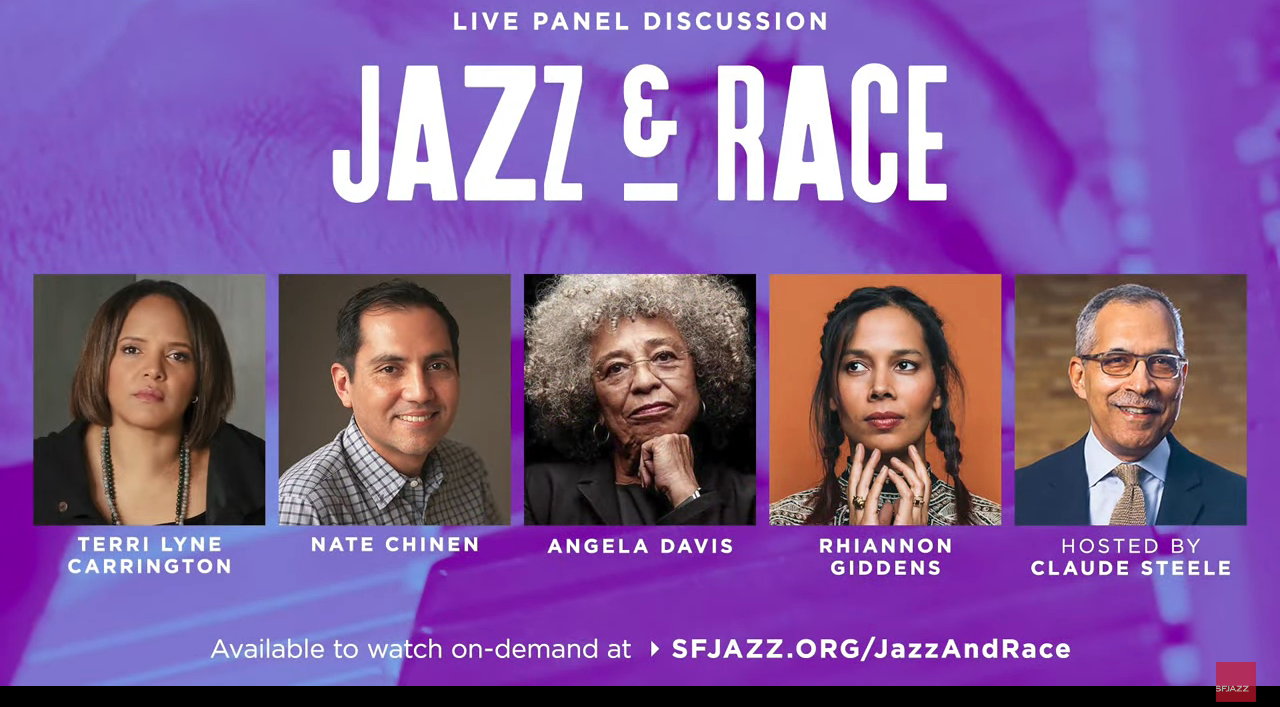 SFJAZZ, the large San Francisco-based organization behind initiatives like the massive SFJAZZ Center venue and the acclaimed SFJAZZ Collective, has offered a multi-pronged approach. High-quality archival video from past concerts is available on their site, and new content becomes available every Friday. Live-streaming shows are airing regularly from the SFJAZZ Center. And the organization is hosting various other online programs, for both jazz students and the public at large. The latest of these, a panel discussion succinctly and provocatively titled “Jazz and Race,” streamed on Sunday February 28 (it’s now available on-demand), and it is a star-studded example of the kind of programming that is still possible—and perhaps, in some ways, easier—in a more digitally-oriented world.

It’s hard to imagine a more high-profile group of speakers, though curiously, only one of the panelists identified as a jazz musician. That musician is the esteemed drummer and educator Terri Lyne Carrington, who called in alongside lauded jazz critic Nate Chinen, Grammy-winning folk musician and banjo expert Rhiannon Giddens, and legendary radical activist Angela Davis. Moderating the discussion was the professor Claude Steele, a psychologist and author known for his studies on stereotypes.

All the panelists made clear that jazz’s identity as a black music should be highlighted whenever possible. “Talking about jazz as black music is something that should happen at every corner of talking about the art form,” said Chinen, adding that the music captures “The experience of the Other in American life.”

Davis took a more philosophical approach, referring to jazz as a “freedom practice” and a way to model alternative societal norms. “I don’t think that jazz offers us a structural model of the democracy that we know, which is a democracy based on exclusion,” she said. “Jazz helps us to imagine a more radical democracy to come...It’s an ongoing practice that continually renews itself and demands active participation from its listening audiences.”

Giddens, meanwhile, is not a jazz musician but has made a career out of uncovering the African roots of banjo-based genres like old time, country and bluegrass. In her opening statement, she detailed her own journey of realizing that spaces that she once thought of as predominantly white were nonetheless places for practicing music with African-American roots. And these musics, she reminded the panel and the digital audience, have always been intertwined with the roots of jazz. “That is the legacy that jazz sits on,” she said. “The legacy of the black string band...and all the language that surrounds that.”

Despite the panel’s title, Carrington, who leads Berklee College of Music’s Institute for Jazz and Gender Justice, was quick to caution that “We can’t leave gender out of the conversation.” And this became perhaps the dominant topic of the panel. When Steele brought up the significant role that black women played in the last election, Carrington quickly responded, “I dare say that there are more women represented in politics than in jazz.” She went on: “We’ll have a female president before we have more than 5 percent of...NEA Jazz Masters and people on the cover of Downbeat who are women.”

Davis expressed frustration that the music industry seemed to be undermining the potential of the music. “Why is it that we have been primed to think about race and racism in this abstract way, and we can love jazz because of how it reminds us about why we have to be free, but at the same time it participates in these backward notions of patriarchy?” she asked.

When the conversation turned toward how to bring more jazz to black communities, the panelists began addressing the event’s host organization directly.

“I remember the first time I played SFJAZZ, I was told to play softer,” Carrington said, explaining that large concert halls originally designed for classical music can often be poor jazz venues, even as the music has gained cultural cachet among white Americans by being presented in these venues. “There’s this mentality of these Western European standards,” she said.

Chinen added that to make their offerings more relevant and provocative to a more public audience, more curation power should be handed to artists themselves. “When Jason Moran was at SFJAZZ [he] had a skate ramp constructed,” he said, describing how this brought members of the skateboarding community into the fold. “Musicians are so creative, and when they are given the opportunity to bring something to an institutional setting, they often are coming up with things that we couldn’t have anticipated.”

A great deal more was brought up as the five panelists let the conversation flow freely. And with over 700 digital audience members tuning in (and the event still available on-demand), the discussion reached perhaps more ears than it would have in a brick-and-mortar setting.

But Carrington, an alumna of many a panel discussion, cautioned that these sorts of events must only be a starting point. “Awareness is key but I’m almost to the point of being over panel discussions,” she said. “I want to see people embrace what they already know. Now that we have more awareness around doing the right thing and doing the just thing, it feels to me that people need to do the work themselves.”