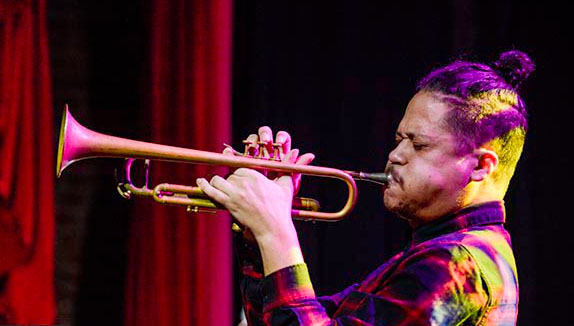 Since moving to Portland in 2014, Noah Simpson has quickly become one of the city’s most active musicians, a forceful trumpeter and eager collaborator whose music draws liberally and eclectically from the Black American canon, combining burning post-bop and jazz harmony with elements of hip-hop and soul.

PDX Jazz, the non-profit behind Portland’s largest jazz festival, has taken note. Before the pandemic even hit, they recruited Simpson to revamp their in-school jazz education program and create a new, hour-long work designed to introduce young audiences to the music. But this is no typical jazz-education seminar; in fact, it doesn’t even move chronologically. “The American Refrain: Jazz and Modern Music,” developed by Simpson in collaboration with PDX Jazz Education Director Shelby Walton-Clark, uses a blend of modern pop music, iconic jazz standards, and original compositions to illustrate the links between jazz and much of the music that currently permeates American popular culture.

“We actually start with a tune by [pop music artist] Pharrell,” Simpson says, “to say, ‘This is music that comes from a Black American, and jazz is music that comes from Black Americans; let’s talk about how this came to be and how these musics share certain themes, both musically and concept-wise... We talk about how for Duke Ellington and Charlie Parker, songs like ‘Confirmation’ and ‘In A Mellow Tone,’ they were made for clubs, made to be performed in front of an audience for entertainment. But songs like [John Coltrane’s] ‘Alabama’ and [Kendrick Lamar’s] ‘How Much A Dollar Cost,’ and the old worker song ‘Which Side Are You On,’ they have a message behind them that were meant to be presented in a certain frame.”

Originally designed to be performed in Portland middle and high schools, the program was forced to change shape by the pandemic. But in some ways, this has only improved its visibility; instead of debuting in a local school, “The American Refrain” will make its world premiere at the 2021 Biamp PDX Jazz Festival, performed live from the Jack London Revue on February 24. And in the spirit of what the piece was originally designed for, PDX Jazz is allowing educators and students to access the live stream of the show for free.

Simpson worries some viewers might tune in with the wrong expectations. “I have weird fever dreams that someone’s going to be like, ‘why are you talking down to me?’” Simpson says. “I’m not trying to, man! This was written for middle and high schoolers. But it’s still a great feature for music that made me fall in love with jazz and music that makes me super excited now, and I have two of my own original tunes in there. I am very happy with the outcome.”

One of the show’s strengths lies in its personnel, a cast of young and accomplished Portland musicians including pianist Charlie Brown III, bassist Jon Lakey, drummer Cory Limuaco, singer Danielle Barker, the musician Blossom rapping, and a horn section of saxophonist Machado Mijiga, trombonist Adriana Wagner, and Simpson himself on trumpet. “It’s very representative of the scene,” Simpson says of the band. “We’ve got a wide range of age groups and backgrounds. It may be a little on the younger side, but I like that...When we think of education, we don’t necessarily think of younger people.”

Indeed, this might be the ideal group to get students—and many adults—interested in both jazz and the wealth of original music happening in Portland right now, an element of the city Simpson thinks should never be undersold. “There’s so much true creativity that comes out of this scene,” Simpson says.

And despite the difficulties faced by Portland’s jazz scene in recent years, Simpson thinks this energy of creation has helped the scene immensely, especially in the face of the decimation wrought by a global pandemic. “I don’t think Portland jazz was always supposed to be represented in a club sense,” he says. “We have such a large busking culture...especially during Covid, it feels natural to see people gathering and playing in the park. And then to see how different organizations have pivoted to something that has been more creative, like the Cathedral Park Jazz Festival last year...and like the Montavilla Jazz Festival...The real benefit of this community is its creativity, and that’s not something that is always celebrated.”