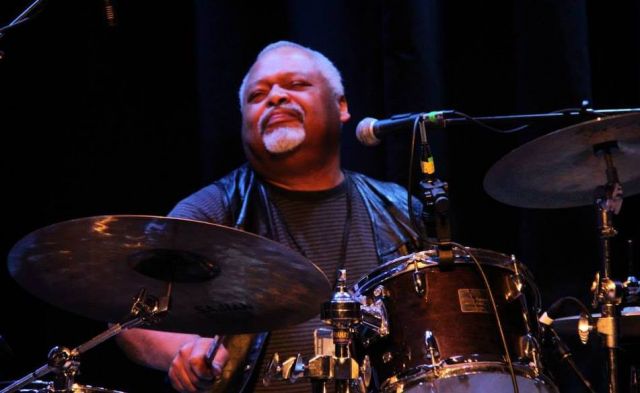 Portland's music scene lost one of its titans this week when drummer, bandleader, and radio DJ Carlton Jackson passed away at the age of 60. In addition to playing with Booker T. Jones, Bo Diddley, Billy Eckstine and more, Jackson was a mainstay of the Portland jazz scene, playing with Dan Balmer, Jim Pepper, Tom Grant, Leroy Vinnegar, Thara Memory, and numerous others. Starting in 2009, Jackson hosted the popular KMHD show "The Message," highlighting "African-American consciousness" with consistently creative programming. To remember and honor Jackson, Jazzscene is republishing our cover story on Jackson from 2008, when he was inducted into the Oregon Music Hall of Fame.

Carlton Jackson, one of Portland's A-list drummers and the first call for many topflight gigs in the Rose City and elsewhere around the nation, was honored October 18, 2008, with his induction into the Oregon Music Hall of Fame. The 47-year-old Jackson is a multifaceted musician with a deep grasp of a host of styles. In any week you may find him propelling Dan Balmer's modem jazz trio at Jimmy Mak's, laying down jam-grass beats behind Darrol Anger's Strings for Industry, whacking a backbeat with the Piano Throwers, or dissecting New Orleans second-line funk with blues pianist D.K. Stewart and his quartet.

That variety is a testament to the well-rounded and well-grounded Jackson, who's been playing professionally since he was 15 years old. Growing up in a house full of music, he found his passion in the third grade, when he began learning the rudiments from popular band director and Dixieland musician Bob Brewer, a member of the "Lewis & Clark Mafia" band of musicians in the '50s that included Hal Swofford and Larry Morrell. It was that exposure to ensemble playing that lit Jackson's fire.

"It's funny. I never went into this thinking, ‘I’m going to be a musician,'" Jackson says. "I remember saying to myself, I'm going to be a doctor or a lawyer. You know how kids say stuff. Music was always around our house. Then I slipped into band and choir in the lower grades. Then I got a feel for what felt good, the music, the camaraderie, the delivery of it. I glided into it. It became part of my fabric. Then I ran into people who fostered that love. It started to make sense."

Jackson has worked his way up the regional ladder, doing major stints with former Oregon-based jazz keyboardist Dan Siegel and 13 years with Portland's Tom Grant, both of whom enabled him to tour and record. "That," he says, "grew chest hairs." He's appeared on scores of recordings and commercials as a hired gun, and continues to be an in-demand sideman, teacher, performer and digital producer.

"It's a wonderful honor," Jackson says of his induction.

"The one thought that keeps popping up in my head is, 'Let's see what the next 47 years holds for me.' It's good to be recognized. I keep thinking of my mentor, Bob Brewer, the guy that started me out playing drums. It centers me. I don't exist without someone like that."

Jackson is steeped in not only a variety of styles but in a rich tradition of the musician discipline. How he counsels young musicians is the way he himself was counseled.

"Learn your basics," he says. "Learn how to sight-read. Learn styles and play different idioms of music—concert music, stage band. Play in an actual pit band. Ron Carter once said young people don't have much to do except learn their instrument and be ready when called. That encompasses a lot of hours, days and years. If you're a young person, just keep your ears open and try to stuff as much as you can under your lid." 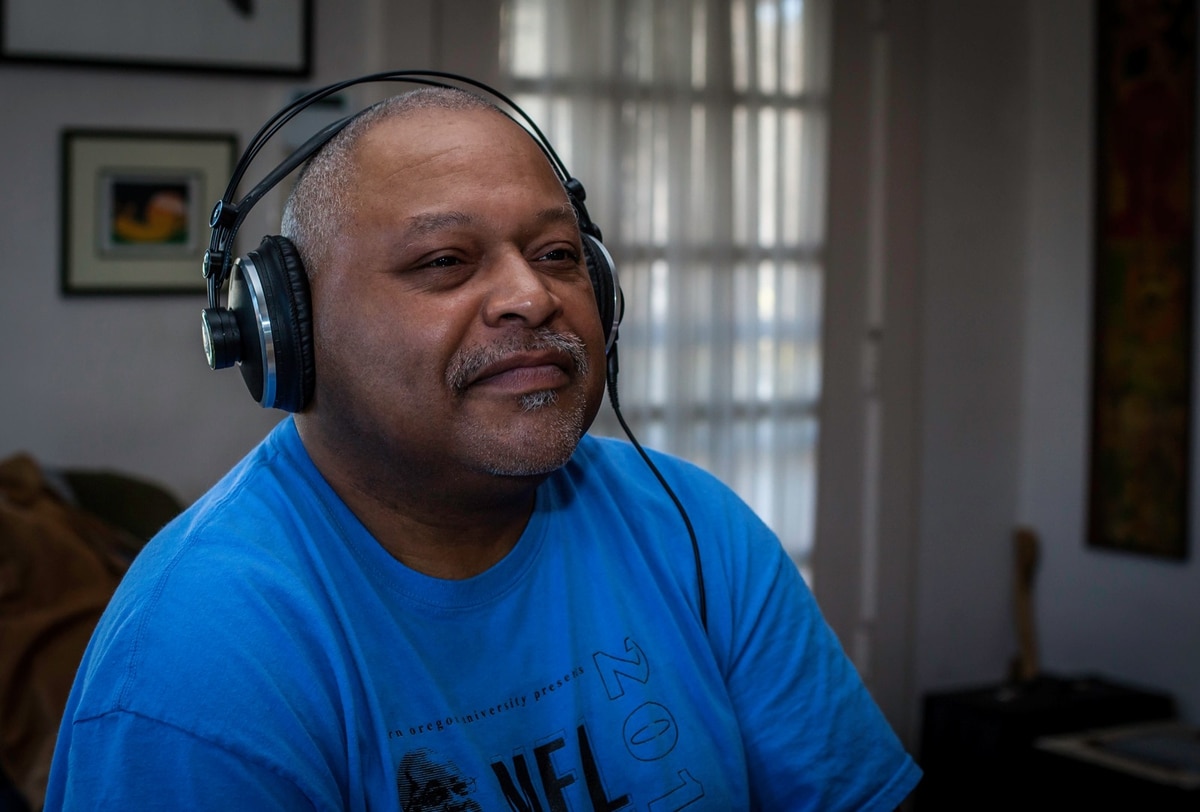 That's what Jackson has done. Over 30-plus years, he's earned a sizable reputation in a scene that's constantly changing. "We're losing one audience to age," he says, "and trying to educate the younger audiences to what's going on. That's the academic side. The economic side, there are still clubs that take advantage of musicians. Not all clubs are bad, but there are a couple that are heinous." Toward bettering that economic reality, Jackson cites local efforts to establish a Pay to Play designation, whereby clubs earn the right to fly a Pay to Play sign in their windows showing that they pay fair wages.

It's a familiar refrain for musicians. Jackson tends to guard against the shortage of work that plagues the profession by being supremely prepared, and that keeps him in demand. He never quite quenches his musical thirst. He especially relishes gigs that afford him the opportunity to play what he calls "legit" music, with symphony orchestras. "I always told myself that I'd get better with legit kinds of stuff," he says. "I respect people in town that do it well, like the symphony guys. They've always been generous."

Be prepared: Jackson lives by the credo, and it has earned him tremendous respect in the business. He looks so comfortable, and plays with apparent effortlessness—are there any musical situations that still intimidate him?

"Any situation that I'm not prepared for," he says. "Anything I do, from legit to jazz to country and western, to hip hop, to electronica, if I'm not prepared, that's when I'm worried. If somebody asks me to play with them and I get a 20 tunes on a CD and there's not time to listen to it, some way somehow, I don't want to go in and not be prepared. That's what really scares me. I have a couple of times where there just wasn't time to prepare. You do what you can. You're listening to the CD on the way to the gig. You make some mental notes, you make some physical notes on 3-by-5 cards. Anything to get you were it's supposed to be at, without struggling to remember each groove for 20 tunes. It directly relates to the preparedness. If you go in unprepared, you're going to reap the bitter harvest that you've sown."

The physical preparation for each gig changes—cymbal or drum set-ups, tunings and his latest electronic pursuits that find him on the bandstand with a laptop computer full of samples. But his mental approach remains the same.

"Every gig is different," he says. "The atmosphere of sounds change, the attitude in the way you play and execute changes. Things in my technique don't change. I have a certain level of execution that I like to keep going. That allows me to get the mode of delivery out. If you play in a blues band, have your shuffle together and be ready to play it a large percentage of the night."

After a recent rugged rehearsal in the orchestral situation, Jackson recalls, trumpeter and arranger Thara Memory called him up to offer encouragement.

"He said, 'Don't give up,"' recalls Jackson. "He saw me hanging out and soaking up the knowledge. 'Don't give up because we're going to need you,' he said. 'When I put my symphony together, I want you to put together my percussion section.' It means I have to keep retooling myself the right way to keep up with the requirements. That kind of stuff just makes me stronger."

If there's one arena besides "legit" music he'd like to be better tooled for, it's Latin music. "Still, with Bobby Torres' help," he says, "I'm trying to be a better Latin drummer. The contemporary Latin drummer is asked to do a lot of things. It's a challenge. It's fun to immerse yourself in that, but I didn't come up in that plane. Any of that stuff that I can't do just gives me heftier respect."

Jackson has also dived headlong into digital production. In an age of dwindling record-label clout, the leveled playing field of the Internet, and the meteoric rise of all things digital, he is informed by all of it.

"Technology doesn't scare me," he says, and he is at home with a laptop full of samples and with software like Ableton Live and Reason. "It's allowed me to create musically," he explains.

On a recent Monday, Jackson was with the Dan Balmer trio at Jimmy Mak's. Balmer's singular guitar style and way with a melody offered plenty of fuel for George Mitchell's smooth keyboard work (including playing bass lines with his left hand). And Jackson laid down the pavement over which these two motored along. It was seamless, inventive and, from the look on Jackson's face, freeing.