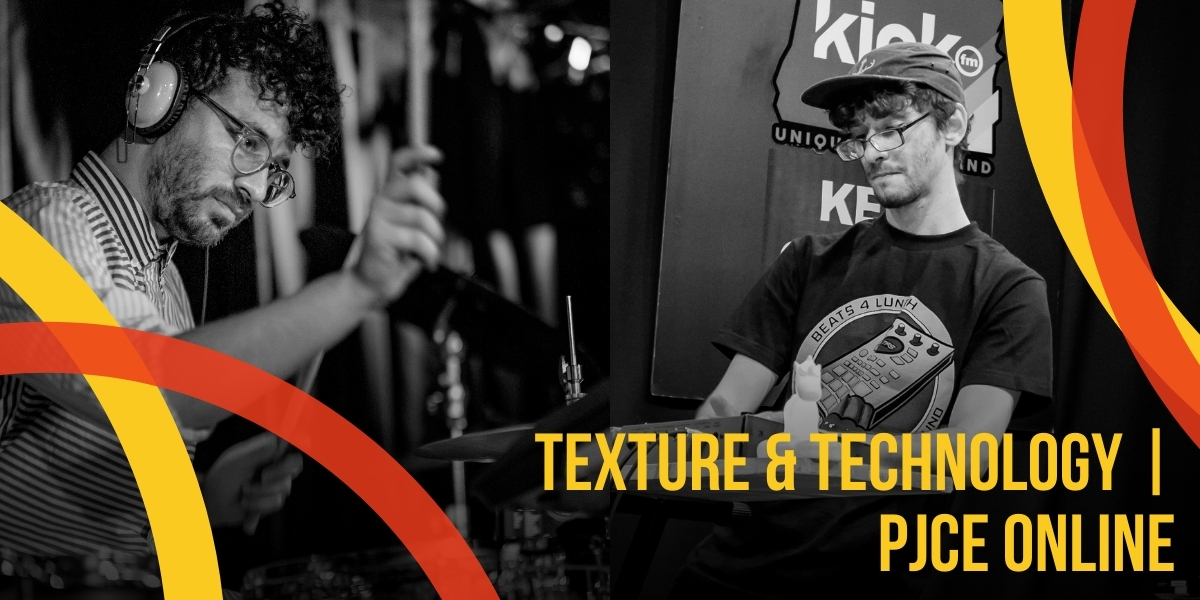 The Portland Jazz Composer’s Ensemble was founded over a decade ago, and in the years since it has expanded into one of Portland’s most consistently vibrant jazz nonprofits and record labels. Though the pandemic has hit PJCE as hard as it has many in the music world, it has also provided opportunities to continue the organization’s expansion into various new fields and media. One such opportunity has been the monthly “PJCE Online” series, which, under the supervision of Executive Director Douglas Detrick, has presented a veritable smorgasbord of new compositions and digital performances devised during the pandemic.

“Texture and Technology,” the latest of these offerings, premiered on March 21, and it might seem a little unconventional at first (or second) glance. It’s a high-quality video recorded at Portland Center Stage that features drummer/composer Micah Hummel and bassist/electronic musician Alex Meltzer performing original compositions and discussing their process. The music is far removed from straight-ahead jazz, with Meltzer sitting behind a laptop and manipulating sounds and samples while Hummel moves fluidly between acoustic drums and electronic drum pads. But as the duo explains in a post-premiere Q&A with Detrick, the improvisatory nature of the project draws significantly from the jazz tradition.

“That’s something that I got from my mentor George Colligan,” Hummel says. “He always told me that jazz is an approach to music, not a kind of music. And to me that makes the most sense...If you think about Kneebody and Miles Davis, they’re completely different, but they’re all jazz. It’s because the approach is there, and the foundation of coming from the same perspective. But if someone tried to fight me on whether [this duo] was jazz or not, I kind of wouldn’t care.”

The project is a collaboration between friends and roommates, but it wouldn’t have made it this far without COVID-19. Hummel has been active in projects like Colligan’s Other Barry and the indie rock band Sama Dams, and Meltzer usually performs with Barra Brown in the experimental duo Korgy and Bass. But when lockdown hit, the two found themselves stuck in their home with a lot of time on their hands and a lot of loose musical ideas that quickly gathered momentum.

“Micah and I have been in this together since the start of this quarantine,” Meltzer says. “It’s good to have a musical household to stay busy and positive with.”

What resulted is a set of compositions that sound remarkable open and fluid but still maintain solid form. “Palette,” which opens the duo’s video, began as a solo drum piece by Hummel, but Meltzer’s involvement adds a new dimension to the sound, with flickering, almost choral textures and deep, sustained bass notes adding roundness to Hummel’s tight drum grooves.  The drums are equipped with Sunhouse Sensory Percussion technology, which translates the specific strokes of Hummel’s drumstick into digital information and triggers the electronic sounds. Meltzer explains that their unique setup allows them to improvise not just with notes and rhythms but with other elements as well.

“We associate improvisation with vocabulary and playing changes, but in this setting, we’re using a different set of tools to grab from,” Hummel explains in the video. “For instance: samples, sound effects. In this song we’re using reverb as an improvisation tool. In this specific song, the reverb is on the rim of my snare drum, and when I hit the drum louder, it creates more of a reverb.”

“Never Easy,” the second piece in the duo’s video, is more traditionally melodic, built on a recorded sample of glitchy guitar. But Hummel’s rhythmic invention adds an off-kilter sensibility to the otherwise straightforward piece. Meltzer describes the way the samples in the piece act as improvisatory material for him.

Detrick describes the duo’s music as an electrifying way of recontextualizing the drumset as an instrument:

“There’s that quality of it being a little bit superhuman,” he says. “I’m used to hearing the sounds of the drumset, and this is different. You get the sense that there’s more going on than you usually hear. It creates its own environment.”

His faith in the music is apparent in the care that PJCE has taken to showcase Meltzer and Hummel’s music. The organization’s record label, PJCE Records, will be releasing an EP by the duo, and the full Portland Center Stage video will be released on the PJCE site soon. It’s a happy result for a surprise quarantine project, and it’s probably a big part of the reason that the pandemic has been an enjoyable time for both musicians.

“For me, I was doing music full time before the pandemic,” Hummel says. “To have maybe six to ten gigs in a whole year, obviously it’s a lot different. But things have been pretty good, and I feel like things are picking back up all at once. So I’m hoping that I can hang with a similar workload that I could before.”