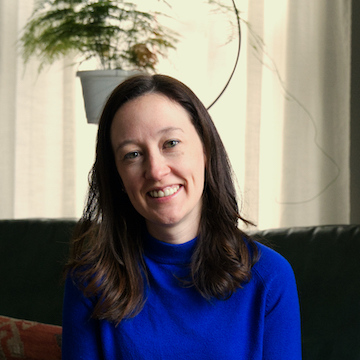 Filling the shoes of Douglas Detrick, the multi-talented artist and composer who, after eight years is stepping down as the executive director of the Portland Jazz Composers Ensemble (PJCE), was never going to be easy.  During his tenure, Detrick helped continue the expansion of the organization's Young Jazz Composers program, which offered mentorship and performance opportunities for Portland's ever-growing pool of jazz talent, and supported the release of fantastic albums by local artists like Darrell Grant, Virginia Lopez, and The Aaron Space Cosmic Orchestra.

Luckily, the organization didn’t have to look very far. Last week, PJCE announced that local musician and DJ Meg Morrow will help lead the PJCE through 2022 and beyond. Even though her name might not look familiar, Morrow’s voice should be a familiar one for jazz fans in Portland beyond. For the past few years, she has graced the airwaves of KMHD, hosting the AM Bridge under the perfect moniker of Meg Samples.

Morrow also brings a wealth of experience as a player, an educator, and an advocate. A lifelong drummer and percussionist, she graduated from the University of Louisville’s Jamey Aebersold Jazz Studies Program and spent her time after college helping open doors for budding musicians through her work with Girls Rock Louisville and the Kentucky School For the Blind.

“I’m excited for Meg to join the team,” says PJCE’s Artistic Director Ryan Meagher. “She has already been a valuable addition to the jazz community here in Portland and with her knowledge of the music as a musician and radio personality, I know she will push PJCE to new places.”

Right after PJCE announced her hiring, Jazz Scene caught up with Morrow to find out more about her past, her present work at KMHD, and what she sees as the future for PJCE.

What attracted you to this position with the PJCE?

I’ve been following what PJCE has been doing for the last couple of years since moving to Portland. Really just trying to follow all things going on in the jazz community in Portland - the Montavilla Jazz Festival, PDX Jazz. And I’m at KMHD, so I always want to know what’s going on, how people are operating. Of course, during COVID I was pretty much limited to social media and what people were livestreaming. I’ve really liked PJCE’s mission and how they’re pushing the original jazz, which you don’t get a lot of the time. You get standards or tributes, which are great, but originals are a very important part of the jazz world. I have been working with nonprofits for the last decade or so as a program manager, music director, and artistic director, but never as the executive director of a particular program. So when they posted this position, I thought it would be a great source of growth for me.

As you move into this role, did you have a vision for how the organization would evolve and where you want to see PJCE go from here?

I would like to expand a lot on what they already have in place. I’d like to expand on the jazz education aspect of it. They’ve been doing the Young Composers Project for a while, and I’d like to see more of it to get a different demographic for jazz. Our scene is so good that I think we can expand on that. And get people creating new jazz. PJCE have a really great strategic plan in motion that came about this year, so what I’m excited about is expanding on it.

You’ve been here in Portland just about three years. What brought you here?

My husband was offered a position out here but we had been looking for different ways that we could move out here and live and be involved in the Pacific Northwest scene. He got an offer and I started really deep diving to see if I could find something that would line up with the jazz world and my background in radio. And a position at KMHD came up and I got that, so that sort of sealed the deal for us.

I wanted to dive into your background a little bit. You are a jazz drummer and have studied that throughout your life. When did that begin for you?

I started playing drums pretty young, at eight years old. I grew up in the church and played drums there, then got involved in jazz in high school and just loved it. I thought it was the greatest way to play drums and work with other people. I auditioned for the University of Louisville jazz program and got a scholarship, so that decided my fate.

Were there any drummers that really inspired you or that you feel like you were influenced by at the time?

Oh yeah. I was in the church, and there was a particular drummer in my very small town of Kentucky who happened to be there. He was a gospel drummer from Louisiana, and he was going to school for jazz drumming before that. I started taking lessons from him and I was like, “This is the way I want to approach a drum set.” I love playing rock ‘n’ roll and other genres, but there’s something about jazz where you’re playing the whole kit. Sometimes you’re playing melody, and I was really drawn to that.

You’ve taught drums and percussion as well. Was that something you always wanted to pursue?

I never really thought about it until I was in school and was the only female drummer in the program. And one of maybe two females in the entire jazz school. I don’t know why it didn’t occur to me until I got college but I was like, “Where are all the women and why am I the only one at all the jazz jams?” If you don’t see someone like yourself, you sometimes don’t think that you could do it too. I wanted to make sure that other folks are seeing a female player. I feel like today I’m seeing a lot more and it is more commonplace, but where I was at, that just wasn’t happening. That’s really how I started teaching. Then I really liked it. And I always say that you get better as a player when you teach so there’s a bonus in that.

Something in your resume that I was drawn to was the work you’ve done to make sure music is accessible to typically marginalized groups. You’ve worked with Girls Rock Louisville and you were a percussion instructor for the Kentucky School For The Blind, which seems like a fascinating and exciting challenge.

It was maybe my favorite job, to date. It was really amazing. It was K through 12, all ages. And a lot of the kids actually live at the school. You could live there and go to school during the week. I did one-on-one lessons, and I did a full on high school professional ensemble where we played everything by ear. We didn’t do braille music at all. The kids were so talented. I couldn’t keep up. I was throwing everything I knew at them. We were performing all kinds of things. Led Zeppelin and Thelonious Monk, all in the same concert. It was so fun. Disability is a big thing to me. Jazz is so easy when you unlock the mystique about it. A lot of times there’s this academic mystique about jazz that doesn’t need to be there. It is improvisation, so if you want to play it and it feels good, then guess what? You’re playing jazz.

I also wanted to touch on your work at KMHD a little bit. How do you approach programming a show every day? What sort of challenges do you face?

I think, as a radio DJ, you always want to feel like you’re not repeating yourself. But at times, repeating yourself is okay. I think I’m still learning that. Because there’s always new listeners. There’s always someone tuning in who — even though to me it seems crazy — has never heard “Take The ‘A’ Train.” So I always think, “Hey, maybe someone just turned on KMHD right now and they’ve never heard of Bill Evans. Maybe I’m going to be the first person to show them that.” I keep that in my mind. I also love exploration of unknown artists too, which comes in with local or regional acts that don’t have a huge label behind them. I think KMHD does a great job exploring that kind of work, which makes my program really exciting. Being able to say, “Have you heard this? I bet you haven’t but they’re really amazing. You’re gonna love it.”

What are your first steps as you start in on this new role with PJCE? Where do you begin?

It’s been a steep learning curve. Doug has been so active with PJCE for these last years and there’s already really cool spring programming that we’re getting ready to announce. So I’m kind of playing catch up here making sure that I know what we’re getting into. It’s already in motion. For us, it’s getting that spring calendar really solidified and making sure that all the musicians and all the venues are on board. We’re going to announce something in the next couple of weeks, so that’s really exciting.