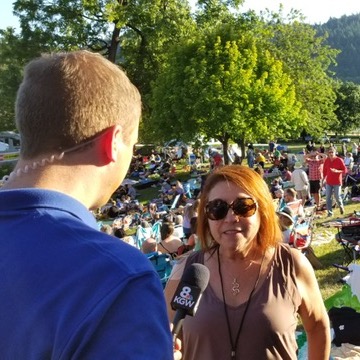 The Jazz Journalists Association (JJA), the august body of jazz writers and photographers from around the world, recently announced their 2022 slate of Jazz Heroes, and among them is our very own Rita Rega!

These awards are handed out annually and given on the basis of nominations from members of the jazz commmunity throughout the U.S. Rega, President of the Jazz Society of Oregon (JSO), was nominated this year by colleagues Lynn Darroch and Rick Mitchell.

"I was very surprised to receive this honor," Rega said, in response to this news. "There are many in Portland’s jazz community that are deserving. We have a culturally rich tradition of the arts here and I’m thrilled to be part of it."

Rega has been a crucial part of the Northwest jazz community for decades. She was one of the original board of directors of KMUN, the noncommercial radio station based in Astoria, OR, and has been a regular voice on the air, hosting jazz programs on KMHD and KBOO. After moving to Portland in 1985, Rega became involved with the JSO, beginning as a member of the development committee where she helped organize events and eventually taking on the role of President. And 2015, she began helping with the programming for the Cathedral Park Jazz Festival, a free, outdoor jazz event held in North Portland since 1981. The 2022 edition of the festival will be happening from July 15 - 17.

“Of course, I am honored by this award,” Rega said. “I have a very long view of this scene, and I’m happy to still be involved after all these years. My attitude is that there’s still much more to do. I am always looking for the next new thing.”

Read more about Rega's nomination here, and click here to check out the full rundown of the JJA's 2022 Jazz Heroes.