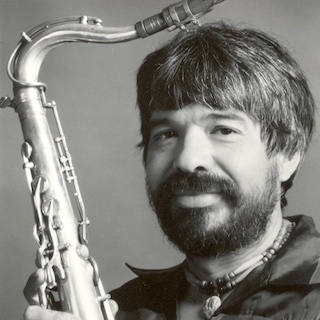 Thirty years ago, the Portland jazz community lost one of its most dynamic voices. Until his passing from lymphoma in 1992, saxophonist Jim Pepper had amassed an impressive and diverse discography, collaborating with everyone from art-folk provocateurs The Fugs to Charlie Haden’s politically motivated big band the Liberation Music Orchestra to famed guitarists John Scofield and Larry Coryell.

But what Pepper is most remembered for was his interest in fusing his Native heritage with the sounds of modern jazz. On stage and on albums like 1971’s Pepper’s Pow Wow and 1983’s Comin’ and Goin’, the Kaw/Creek musician shook up the expectations of listeners by folding chanting and the pulse of traditional percussion in with his muscular tenor sax and the explosive playing of collaborators like drummers Hamid Drake and Billy Cobham.

Three decades after his death, Pepper is still being remembered and honored thanks to the work of Gary Ogan, a musician of Cherokee heritage who leads the Jim Pepper Flying Eagle Band — performing on Sunday July 17 at the Cathedral Park Jazz Festival — and Sean Cruz, the executive director of the Jim Pepper Native Arts Council, an nonprofit that has, among other things, organized a festival featuring Native musicians from throughout the Northwest.

While he emphasizes that Pepper’s art has touched so many people around the world, Cruz feels a particular connection to the late musician. Not least of which because, in 2002, he wound up buying and moving into Pepper’s family home. Cruz knew nothing of the house’s provenance but felt drawn to it through some indefinable spirit. It wasn’t until Pepper’s sister arrived on his doorstep that he began to put the pieces together.

“She said, ‘You know, my mom, would love to see the old house again,’” Cruz remembers, “And the following week, she brought her along.” Pepper’s mom, Floy, was a beloved educator and in her mid-eighties at the time. By all accounts a lovely visit, Floy left Cruz with a gift: a bootleg copy of Pepper’s Pow Wow on CD.

Later, when he spun the disc, and it landed on “Witchitai-to,” a song that set Native chanting to a backdrop of funk, a flood of memories came back to Cruz. As a young man studying music in the early ’70s, he took his girlfriend to see Larry Coryell opening up for Chuck Berry in the Bay Area. The crowd was entirely indifferent to the jazz guitarist’s set, until he announced that he was going to let his saxophone player take a spotlight turn.

“He took over the room,” Cruz says of Pepper. “Everybody was up off the floor, dancing, singing, chanting. And then they were gone. After the concert, I had to find that record, but I couldn’t remember his name. I looked around for years and never found it. 30 years later, I live in his house, I just met his mom, and she gave me the record that I’ve been looking for.”

Since then, Cruz has been working closely with the family to keep Jim Pepper’s memory alive. In addition to organizing the Jim Pepper Native Arts Festival, Cruz helped draft resolutions for the Oregon state senate and house to honor Pepper’s legacy and organized Jim Pepper Week in Portland back in 2016. And in addition to working closely with Ogan as he prepares to perform with his Flying Eagle Band at the Cathedral Park Jazz Fest this year, Cruz is also in the early stages of producing a documentary series about Pepper’s life and art called The Path, named after the saxophonist’s 1988 album.

“I’m exploring Jim Pepper’s path, which has also become my path,” Cruz says. “There’s no telling how far it’s going to take me and what I’m going to find on the way.”