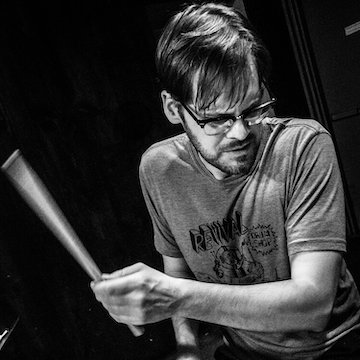 Originally from Reno, Nevada, drummer Matt Mayhall took a typically meandering path to land here in Portland. After graduating from high school, he slipped over to Los Angeles and spent the next 16 years studying music and gigging with an array of other imports like guitarist Jeff Parker and saxophonist Chris Speed, both of whom feature on his 2020 album Fanatics. But with him and his wife starting a family and wanting to be close to their respective parents, they pulled up stakes and relocated to Portland — right as the pandemic swept through the world.

“It’s only been about a year since I started meeting people and starting to make the rounds playing all the gigs that people play around town,” Mayhall says of his time in Portland. “It’s been really, really cool. There’s a different aesthetic and a different style of playing here, but I’m  happy to try and meet the challenges.”

Recently, Mayhall has begun to assert his style of playing more and more into the local community. He has served as bandleader at gigs at The 1905 and, tonight at the Jack London Revue, will be bringing back a show that he put together in L.A.: a performance of the music Herbie Hancock wrote and recorded for Michaelangelo Antonioni’s 1966 film Blow-Up.

The soundtrack for that film is a perfect reflection of the Swinging London scene represented on screen, the brash, colorful era that served as the pivot point between the explosion of blues-based rock bands like the Beatles and the Stones and the rising influence of psychedelics. And with Hancock at the helm, the music folds in the influences of bebop, Latin jazz, and R&B.

“I sort of took it on as a transcription project,” Mayhall says of his Blow-Up tribute. “I thought it would be good for my ears and my musicianship to pick out these tunes and write them out. To see if I can determine what the chord qualities are and make the charts. And this film having a place in the counterculture and having a soundtrack from an artist that we all revere with a band that is all the heavy guys from the era — Ron Carter and Freddie Hubbard and Jack De Johnette — really piqued my interest.”

Mayhall followed suit by putting together a band featuring some of the best players in the Portland community, including trumpeter Noah Simpson, bassist Andrew Jones, guitarist Dan Faehnle, saxophonists Joe Manis and Bryan Smith, and another recent expat from L.A., keyboardist Joe Bagg.

“Joe [Bagg] is someone that I’ve played with on and off for the past 15 years,” says Mayhall. “He’s a very accomplished player, and I’m sure he’s gonna be all over the place in no time here in Portland.”

What will unfortunately be missing from tonight’s show is the film itself.

“The last time I did this in Los Angeles, somebody was like, ‘You’ve got to figure out a way to project the film or do some sort of presentation that involves imagery from the film,’” says Mayhall. “I liked the idea of it, but I don’t know where to start with that. I’m open to staging this thing multiple times if there’s a way we can make it more of a multimedia event. But it’s also cool just as a set of music.”