Caminhos Cruzados on Blending Global Genres During a Global Pandemic 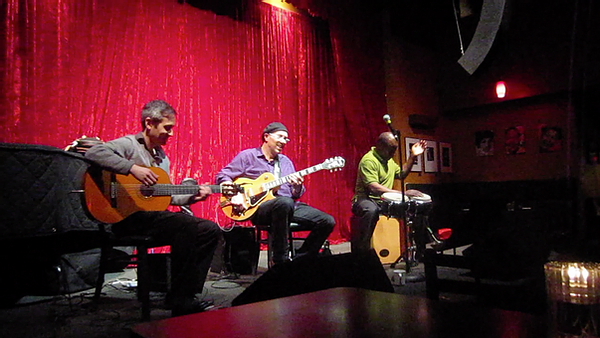 For musicians, COVID-19 has redefined what it means to be busy. These days, for instance, Dan Balmer seems to be everywhere, regularly playing livestream shows with Trio Subtonic and his own bands. But in his mind, things are much quieter than they once were.

“He’s our busiest musician—he plays almost every week!” Balmer jokes, referring to himself.  He estimates that he’s been averaging about four gigs a month. But he’s prioritized quality over quantity, remaining active not only as a guitarist, but as a contributor to a multitude of truly creative projects.

One such project is the eclectic trio Caminhos Cruzados, a collective that brings together Balmer’s electric guitar with flamenco guitarist Nat Hulskamp and master Ghanaian drummer/percussionist Israel Annoh. Hulskamp also co-leads and plays oud with the band Seffarine, and Annoh has been an in-demand drummer in Portland for years, playing with Michael Allen Harrison and Thara Memory among others. And while each member brings a host of experiences and interests to the table, the sound they’ve developed has mainly coalesced around Brazilian music.

“Between a flamenco guitarist, a jazz guitarist, and a West African drummer, it kind of makes sense, with the techniques that we use on nylon string guitar, Dan’s improvisations and really expressive melodies, and Israel’s deep polyrhythms,” Hulskamp says. “We all like each other a lot, and respect what’s different about each other’s approach to this music.”

Caminhos Cruzados recently brought this repertoire to the Seasons Performance Hall in Yakima, WA, where the band performed a livestream set in the spacious venue. Videos from that performance have started to become available on the band’s website. Set in stark contrast to the cavernous venue, the trio’s intimate, mostly acoustic repertoire feels oddly at home, bathed in a shimmering natural reverb. Hulskamp and Balmer trade off solos, offering very different timbres and approaches. Balmer’s clean jazz lines play unexpectedly well against Hulskamp’s finger-picked melodies and textures. Annoh mostly holds things down on the cajon (a large, box-shaped percussion instrument), swerving into a crisp uptempo groove midway through Antonio Carlos Jobim’s “O Grande Amor” and taking a rousing turn on bongos on Jobim’s “Wave.”

The videos released so far, all rich in color and beautifully recorded, are composed of three Jobim numbers and a piece by the Brazilian composer Ary Barroso. But while Brazilian music still makes up the bulk of the band’s repertoire, they are always keen to experiment.

“We do a few of my songs, which is nice for me, because it gives those songs of mine a really different approach,” Balmer says. “And then Nat plays oud and is the premier Middle Eastern musician in Portland, so we tried to get together and do something with the oud and me playing with my pedals and looping, but it wasn’t jumping up the charts. And then Nat also brought in a Paco DeLucia tune, and he writes great music with his wife as well.”

While Balmer, Hulskamp, and Annoh have been able to stay somewhat active during the pandemic, the year has also landed major blows. Hulskamp’s project Seffarine, which he co-leads with his wife, the Moroccan vocalist Lamiae Naki (who sometimes sits in with Caminhos Cruzados), had major touring plans cancelled. And Annoh has returned to Ghana for the next several months.

“I kind of feel like the career I was trying to develop is facing a setback,” Hulskamp says. “It’s becoming a long, long pause. But I’m still optimistic. This is the first time Dan is hearing me be optimistic, but I think it will come back. I just don’t think people were meant to live like this, and live music will be just fine.”

For the trio, their recent livestream offered a moment to appreciate the little things in a musician’s life that are often taken for granted.

“Aside from the great venue and nice staff, it just felt good to drive to a gig,” Hulskamp says. “I’m used to a totally different rhythm of traveling and have been pretty content to stay here in Portland this year, but it felt really good to drive. We all took three separate cars, but we kind of reported back: ‘It got so beautiful and bright in the gorge—did you see the rainbow?’”

Balmer chimes in: “It was one of the two most amazing rainbows I’ve ever seen.”