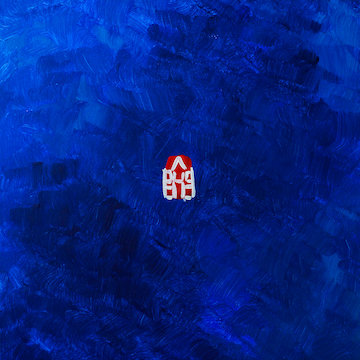 The physical space where a piece of music is recorded can have as much of an impact on the sound as the choice of microphones or the instruments being used. That’s as true of the Van Gelder Studio in New Jersey as it is for someone’s bedroom.

For bassist Liam Hathaway, the location where he and some friends captured the bulk of the material on his latest album was so integral to the sonics and spirit of the music, he named the record after the venue itself: The Farm.

The farm in question was a 40-acre expanse located about six miles outside of Newberg, Oregon that, for the better part of five decades, was owned by Hathaway’s paternal grandmother, Shaffia Richards. Used primarily to grow walnuts and cherries, as well as an array of flowers, it was, as Hathaway writes in the liner notes for Farm, “a fantastical heaven as a child.”

“I used to live there for about five or six years during middle school and high school,” Hathaway said recently. “I got to do a lot of gardening out there and building stuff in the shop and fixing tractors. The whole place was my man cave, almost.”

The story about the farm changed significantly in 2005 when Richards became physically unable to maintain the property and opted to sell it to a nearby winery on a life lease. She was allowed to live at the farmhouse, watching as her orchards were turned into vineyards, but ownership of the residence would revert to the winery upon her death.

That fateful day happened in September of 2020, leaving Hathaway and his family with around six months to clear out Richards’ possessions before handing the keys over. But right before he did, Hathaway invited two of his friends, pianist Wes Georgiev and drummer Carlos Moreno, to the farmhouse to record some music.

Those kinds of invites are not unusual for the bassist. For the last five years of Richards’ life, he lived at the farmhouse and would welcome players for jam sessions in the front yard. But the tone and spirit of The Farm are decidedly different. It’s a knowingly rough sounding recording. The performances are unpolished (Georgiev plays an untuned player piano from the 20s that had remained in the farmhouse’s living room for years) and, as the trio is playing in an empty room that hasn’t been acoustically treated, the entire session has an echo-y quality.

Superseding that is the state of acceptance that comes at the end of the grieving process and exudes from this joyous and heartfelt recording. The mostly-improvised opening track “Noble Pioneer Cemetery,” named for Richards’ final resting place, is a splashy sprawl of wandering piano lines and Hathaway’s forceful playing. Their run through Charlie Parker standard “Donna Lee” has an excited edge; the trio sounds like they’re finally hitting their collective stride and really cutting loose.

The three men even took some time to sneak across to a nearby barn to record a series of freeform improvisations using hand percussion, thumb pianos, Hathaway’s valve trombone, and the sound of the building itself.

“There’s some beams and boards that we were hitting,” Hathaway said. “I was hitting my trombone case. We didn’t say anything. We just quietly walked over there and opened the big barn doors and I set down my recorder.”

The most powerful statements on Farm come at the very end of the album. Before Moreno and Georgiev arrived, Hathaway had the house to himself and decided to record some improvisations on piano and bass. Through them, especially closing track “Dementia/Ascension,” a piece that is both frantic and elegiac, he sounded as if he was exorcizing some deep-seated feelings.

“The solo pieces, I just sat down, turned on my device, and tried to feel something out,” Hathaway said. “I was just inspired by the emotion that I was feeling of losing something that was precious to me.”