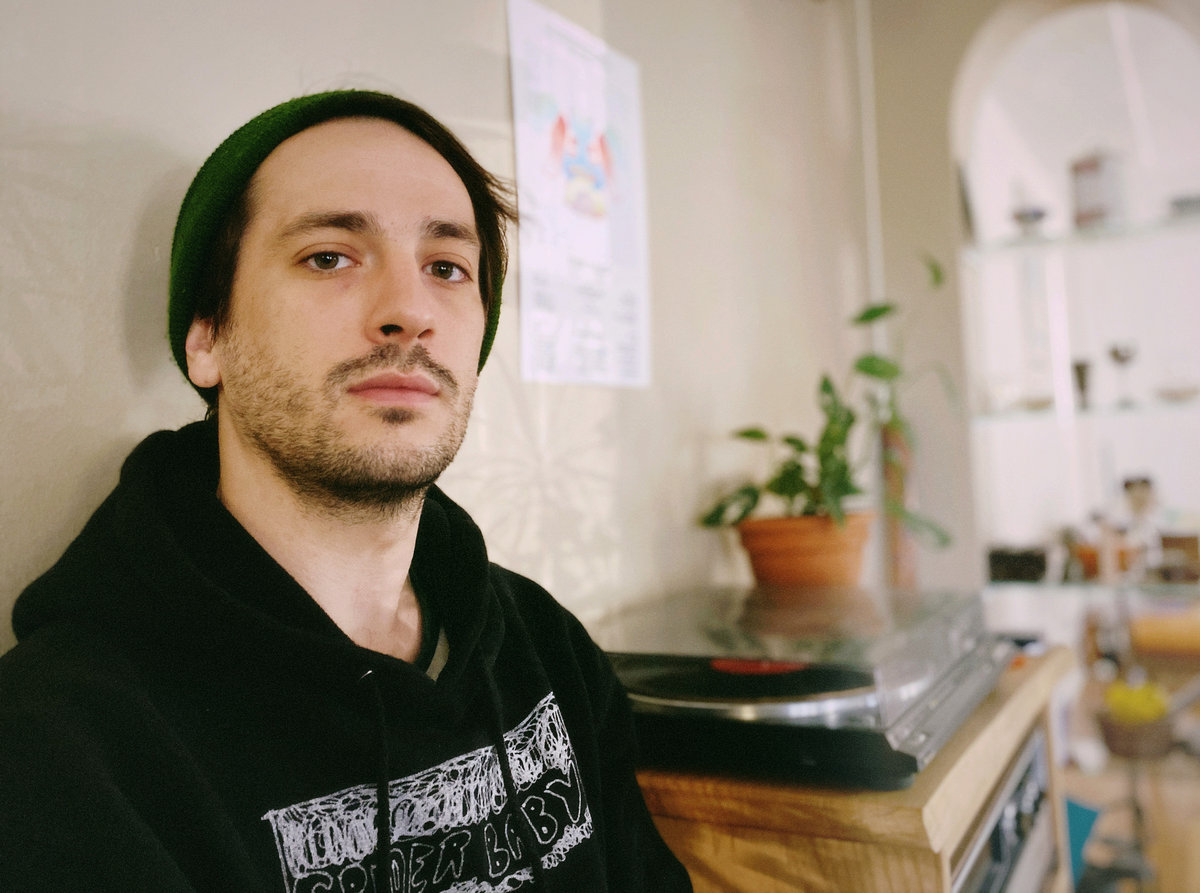 As musicians have come and gone from the Portland scene, Barra Brown has stuck around. Since moving to Portland from Roseburg years ago, Brown has established himself not only as a flexible collaborator in the jazz scene and beyond, but also as one of Portland’s most consistent producers of original music. A drummer, composer, and producer, Brown blurs genre lines and challenges listeners while maintaining a strong sense of melody. In addition to his trio and quintet, he’s one half of the experimental beat-making duo Korgy and Bass (with electronic musician Alex Meltzer), and he is also fresh off the release of a solo album, LFT:RT, that came out in March 2021 and features a host of collaborations.

Brown spent much of lockdown at home, producing his own records and projects for others. But now he’s gearing up for a return to live performance: Korgy and Bass will be taking the stage at the Cathedral Park Jazz Festival July 17, performing music from their 2019 album Remote in collaboration with trumpeter Cyrus Nabipoor. As JazzScene editor, I’m also a longtime friend and collaborator of Brown’s, so I called him up for a casual chat about what he’s been up to and what his plans are post-lockdown. Coincidentally, he had just gotten out of rehearsal for Cathedral Park.

JazzScene: How was today’s rehearsal?

Barra Brown: It was good. We just worked on three of the songs. Cyrus and Alex now both have these RC-505 loop stations. And they have them synced, because we're playing with all these different loops. Alex is the main one, so when he changes the track and then the next BPM it changes on Cyrus's and all his loops are ready to go. That took some troubleshooting back and forth, but the sound worlds we can make with that setup are already cool with just the one rehearsal.

JS: For some jazz musicians, it's quite a foreign concept to have a rehearsal that's all about just syncing up electronics.

BB: Long term, what we want to do is live improvise beats, and be improvising within the context of making beats and loops as opposed to playing jazz heads.

JS: Are you working with composed material at this point, or are you trying to just create things from scratch?

BB: The stuff that's inputted into the loop pedals is from the production files [of our album] essentially. But for the future, and for open sections and improvising, we eventually want to be making those loops in real time and have it feel like it's a composed thing every time.

JS: Are you playing material from the album you all made together, Remote?

BB: Yeah, maybe five or six... a little under half will be from Remote. And then two from Agrocrag, our release after that. And then a couple of new ones. We’re also doing that track “Noah'' from my record, and Noah [Simpson] is going to sit in.

JS: It's funny that you made a record called Remote before everything in the world went remote by necessity.

BB: The whole thing is tripping me out, because we made that record remotely before everyone had to. And now the first show back for the project out of quarantine is playing this music that we made remotely, pre-quarantine! It feels like some sort of palindrome or a mirror of how we made the thing.

JS: Did making Remote prepare you for collaborating on your own record in a pandemic context?

BB: After doing Remote, and then my record, and then several collaborations, I feel like I almost specialize in remote collaborations at this point. I’ve done a lot in the last couple of years.

JS: Including a new track that just came out; “Palm Sweat” with the artist Gluttony.

BB: That guy lives in the Netherlands, and we actually made that kind of at the same time I started my album. He sent me some stuff, I chopped it up, I made an Instagram video. And then he sent me some more stuff, and I was like, oh, actually, this could be really cool. Let's do a single together. And I've just been sitting on it until after the other record came out. I'm also working on my friend Lily's record. Her project is called Sheers; she plays harp and sings. I've been producing that all through quarantine, and she lives in Portland, but we haven't seen each other. We've only texted on the project, but the music is sounding really nice.

JS: Your record was also mostly produced in quarantine, but I recorded my parts on it in person, well before COVID. How much of that album was completed before lockdown?

BB: Stuff had been done in person, but it was even a year before. I had all these sessions that were done in person pre-COVID, and then I produced tracks in quarantine out of them. But I remember you and Noah, we had sessions, and Jack [Radsliff] and I also wrote “Gulls” before COVID.

JS: Do you have plans or desires to do a show devoted to music from your record?

BB: Yeah, I definitely want to do a release show, working the band up and everything. I'd like to do Mississippi Studios, that kind of vibe, and just have a bunch of sit-ins. That'd be amazing. There's no active dates or rehearsals or anything. But I’ve got some merch to move!

JS: You’re also working on building a studio in your basement that you hope to turn into a production hub. What role do you see that project filling in the Portland scene?

BB: A huge part of it is trying to shape and have more control over our experience as musicians in Portland post-COVID, because I want to view it as a start to a new world. I am very adamant that I do not want to have the same experience, so then it’s like, what do we need? What are we missing? We were recognizing that a lot of great scenes in history had people hanging out at a physical location. Part of it was that, and part of it was realizing that if you have your own space, what you can do with that space is up to your creativity, which is really exciting because that kind of intersects with being able to do things like video work, and just being able to have people swing by, like if someone's at soundcheck at Mississippi Studios and then rolls over here and tracks drums. And it felt like there was a community of people making similar music in those adjacent scenes, but not really a place for us to be physically. Where can our music live together? Because we all live in this physical place together, but we're acting like the only experience we can have is gigging at the two jazz venues, which just can't be the epitome of the high-vibrating things we can all do together. So it’s an incubator, a creative hub, and a physical place for people to be coming in and out of, and for us to be making and producing records with artists in some sort of collaborative fashion, offering our extensive network that we have from being here and meeting people.

JS: You’ve stuck around Portland as many musicians have come, gone, and returned again. How would you describe the jazz scene’s evolution in the years you’ve been in town?

BB: Before COVID there was a lot of energy. It felt like it was on an upswing compared to maybe five or so years ago. Maybe it's just that our age range is now becoming the general population that plays those gigs every night. What people listen to generationally changes. People seem to be writing more, which is exciting to me. That's what I've always wanted to happen in the scene, because I’m always like, man, everyone sounds so good; I would love it if they wrote their own music. So that is happening, and that feels really exciting. So I want to figure out, can we organize ourselves in some way as we are all rolling with this kind of energy of collaborating and making our own records? Across genres, Portland seems like a place where people want to have a band, start a band, be in a band, as opposed to hiring people for the gig. But then there's still issues of where to present that music that’s in between genres. There's not that many places to do it.

JS: What could take things to the next level? Is it as simple as a couple more great venues for creative music?

BB: I don't know. We'll see. It doesn't appear that the dealing with promoters and venues and such has shifted or changed. So when we originally talked about our idea, we were talking about renting a space, which is more expensive in one year than to build the whole studio here. But if we had done that, we’d have had a big enough space where we could have hosted events and shows, where it’s not business people having a space for musicians to sell alcohol. It's a creative space for people to imagine things and make things. And I imagine us doing live streaming here [in the forthcoming basement space], but I don't know.

With post-COVID venues, it feels like we're lucky that we even have any. But I’ve also been thinking about whether there are other ways of presenting music that are outside the 2-D audience/stage format, where the sound is one-directional. I’m thinking about other ways of presenting music that are trying to have some imagination. This is how we presented music for a long time, but we’ve got lights and the internet and projectors, speakers that could be set up throughout a space, where all the mics are going to those. I'm just thinking about some of those things. The thing we did 50 times that we didn't like—what if we didn't do it like that?