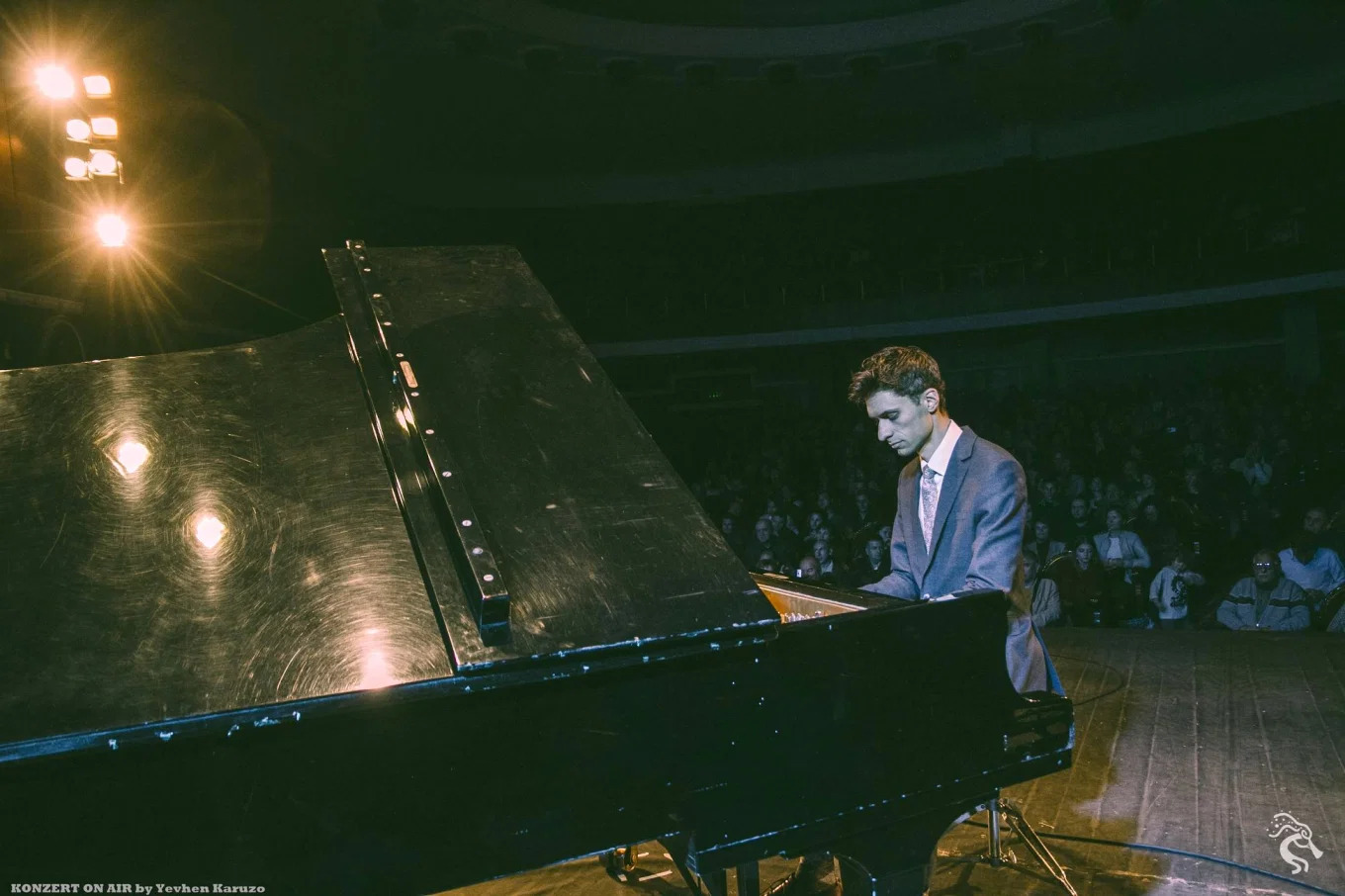 When Andrew Oliver moved from Portland to London in 2013, he left behind a sizable footprint. A prolific composer and pianist, he had been active in the city’s modern jazz scene as well as its old-time jazz and tango communities. He was a leader of more projects than you could keep track of, including the Bridgetown Sextet, the Kora Band, and Tunnel Six. The Portland Jazz Composer’s Ensemble (PJCE), which Oliver founded just after graduating from Portland State University, had already grown into an exciting record label, showing glimpses of the vibrant jazz nonprofit it would soon become.

Eight years later, Oliver has returned to Portland with slightly more focused priorities. In London, he fell deep into the traditional jazz scene, touring Europe with groups like the Dime Notes and the Vitality Five. In 2020 alone he released several albums of stride piano, King Oliver tunes, and other early-jazz standards, some of which were recorded remotely during pandemic lockdown. And in an unexpected twist, he’s also back in school for a Master’s in Urban Planning. With live music on the rise again, Oliver can once again be heard around town, including a performance at the Cathedral Park Jazz Festival on July 17. JazzScene caught up with Oliver about his pandemic experience, what he learned in London, and what he has planned now that he’s back.

JazzScene: It seems like the past year was particularly prolific for you musically. Did it feel that way to you?

Andrew Oliver: Well, the only thing to do was recording, so it sort of doesn't feel like it in a way. At first, it seemed like we just started doing these overdubs because we were all bored and stressed out. That was the first set of things, House Bound Jazz. And then you know, some of them were so successful that we just wanted to do more of it. Bandcamp Friday was really helpful. They were pushing things pretty hard on that platform. And it was just a nice opportunity to stay connected with musicians, especially after the move. It was cool to still be able to do those kinds of projects with the guys over there. So I've done a lot of stuff this year musically, and I think most of it's pretty good. But it was mostly just a way to keep doing some music. And it was a little more interesting for me than just playing by myself constantly. Probably the same for all of us.

AO: It is odd. I feel like some of them turned out pretty good, given what they were. But that was another thing. I got super tired of the live streams. At some point. I was just like, “Alright, that worked as a placeholder for a long time.” But it was interesting. And like everything about the pandemic, we probably learned some things from it. Everyone has good home recording setups now, which is cool, can be useful. You can definitely envision situations where you might want to add one thing here and there and somebody can do it remotely. Not everything. But we were even talking with the Tunnel Six guys about doing sort of demos, and over this time we've collectively written some new stuff. That's the ultimate backburner project. It’s still there; it's simmering away. Somehow I can't even understand why it still exists. But we hear from each other every few months. And if somebody writes a little thing, for a demo or something, we could probably do a nice remote recording now, given what everyone's been doing all year. It may be beneficial skills learned, but hopefully not necessary to do it like that in the future.

JS: In Portland, you played all sorts of styles including a lot of modern jazz. What made you focus on this particular era of music once you went to London?

AO: When I got to London, there was a degree of, “Well, let's just go see what happens.” I certainly went to the modern jazz jam sessions and played with the guys and met everybody. And I also went to [early jazz sessions], because I had been doing that all along, ever since I was in high school as well. I definitely fell in love with that scene. And there were a lot of factors. There were so many good modern jazz players coming out of schools in London, and they were all much better than me. And they all knew each other. And that scene was a little more bro-y than the old timey scene, which, though it had characters, was more dictated by available work. So I think that the attitude of the musicians was easier to fit in with because they had more work. There was less competition. And the more I got into it, the more I discovered that I was enjoying the music more as well. What I liked the most about the stuff I used to do here was the concept organization. I feel like I was better at that than at playing, or even writing. The fun part was putting it all together, organizing the bands and projects and ideas. With the old stuff, I think there's a lot of that to be done. When I started playing with these guys who took a lot more seriously, I realized how much there was there, even just record collecting and listening carefully to the older stuff, understanding the weirdness of it all and how it was really only one little step from folk music. People just did whatever they wanted, and threw it in the pot, before it became standardized. Before the stock market crash, you just had like such an unbelievable amount of stuff going on. And so weird and interesting. So I really got into that side of it, too. It’s the organization side, except applied to early jazz.

JS: How do you balance trying to approach this music with accuracy as opposed to putting an individual spin on it?

AO: I think it's a fine line. There's certainly people who just want to recreate the arrangements. And that can be very interesting, like when we did that King Oliver thing. The purpose of that was to transcribe everything note for note, with ultimate precision, and then play it in exactly the same way, so that we could then apply that to playing other stuff. And we got much farther in person than we did on the recording that we made. On that recording, about a third of the songs were songs that were written by those guys around that time, but they never recorded. We had sheet music, but the sheet is just the melody. It wasn't an arrangement. So we took it just from that and expanded it to the whole thing. The idea was that by doing the transcriptions, we would then be able to do that to other things. And when we play gigs with that band, we play just regular tunes in that style, and some of the transcriptions. Learning and studying what was done—and then trying to do something similar but not exactly the same—is a very interesting exercise.

It’s less stressful in a way for me, because you don't have to just come up with something new. But to me, it doesn't feel uncreative. It's fun to play transcriptions of things, especially solo piano pieces that are really composed, like “Carolina Shout” or something like that. But I definitely like to do something with it, whether it's just improvising on a song in a certain way, or taking something like a rag and then playing it more like a stomp. I haven't gone so far as to really mush everything in there, a la Jaki Byard. He's a great example of how you can study this stuff and then use it in any context.

JS: Have you been keeping in touch with the folks at Portland Jazz Composers Ensemble? Any plans to get back involved with the organization?

AO: It’s great. Doug [Detrick, the PJCE executive director] has done so much cool stuff. I hope he doesn't get burned out on it, because he's done way more than I could have ever anticipated in really cool, interesting directions. I would never have been able to do what he did if I had stayed here and stayed in charge of that thing. It's great that we created something that can be passed on and improved on or reshaped.

We did a thing in the summer with my little piano and we took it down to the park and we recorded some people. Kerry [Politzer] played, and Charlie Brown and Rebecca Sanborn. That was really fun, and Doug made a film. So it was cool to get back involved with them a little bit, but I really like all the stuff they've been doing. It's really relevant and they're trying to bring music into the larger conversation, and looking at Oregon history as well. It's really cool.

JS: Now that you’re back in Portland, do you have projects you’re excited about getting back into?

AO: On the traditional side, there’s Bridgetown [Sextet]. Tyson [Stubelek]'s playing drums now, because Scott Kennedy moved to DC. I'm really thankful that the band still exists. I mean, we started in 2008.We're getting a bunch of new stuff together and having some rehearsals now that we've got our vaccinations. So that's exciting. And I would love to have a couple of regular gigs, for dancing. And then, I mean, I put out that solo record. And in the process of doing that, I got a lot more comfortable with just doing solo concerts, which I had always been sort of reluctant to do before. But that forced me in a way. I hope to do a little more of that. And then Alex [Krebs] and I have the tango band. So that's continuing.

And then Cathedral Park, that's just the trio. It’s David Evans and Tyson Stubelek. It'll be a similar kind of stuff, probably more swing, in the style of, say, the Lester Young trio or the Jelly Roll Morton trio. We’ll play some stomps, we’ll play some rags. I love the instrumentation. Piano and saxophone and drums? It's perfect because you get all the left-hand stuff that you can use, and there's a lot of textures available. You can go from ragtime almost to bop.

JS: Any potential new things you’re thinking about or working on?

AO: I don't really know. It would be interesting to do something that's a little more folk or pop. I've had conversations with Rebecca and Tyson about doing that, because we’ve talked about that kind of thing and done little things here and there for a long time, and nothing ever really came of it. So I hope that something would eventually happen down the road that involves singing and not as much jazz. But I have no idea. We'll have to see if there are any gigs ever again.

Find out more at Andrew's website, and catch the Andrew Oliver Trio at the 2021 Cathedral Park Jazz Festival on Saturday, July 17 at 4pm.