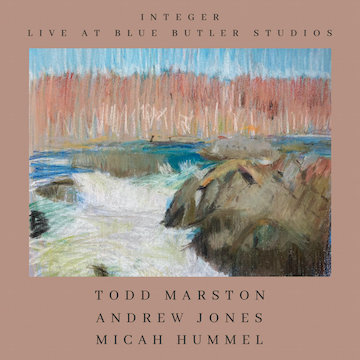 Something about writing music for his trio integer seems to mellow Todd Marston out. In his various guises, either solo or working with his long-running world music ensemble Bajuco or with other local artists, the pianist feels a little riled up and inspired to write by the fraught state of the world. But on the two EPs that Marston has recorded with bassist Andrew Jones and drummer Micah Hummel as integer, something about the all-acoustic lineup or the personality of the players seems to bring him to a very peaceful place.

The latest release from this project Live At Blue Butler Studios features four instrumentals that fan out like ripples on a pond with slow, steady forward momentum and melodic ideas that get grander as the songs roll along. A great example of this is “Channeling,” a ballad that has a poignant heart but a slightly angular energy a la The Bad Plus. After setting the tone, Jones and Hummel vanish for a moment to let Marston nestle into the melody, sliding back in with a slightly amplified spark in their playing. From there, Marston unspools a solo that floats and rises like a helium balloon set free, to which Jones responds with a long, gliding spotlight turn of his own. By the song’s end, the three are in full power trio mode, letting the final kick of their interplay push them to the finish line.

Even the most uptempo moment on Blue Butler, “Hurry Up & Wait,” never lets the light samba rhythm get above the pace of a resting heartbeat. Even as Hummel’s drumming starts to shuffle and come close to bursting, the mood of the track remains as cozy and warm as a sun-kissed summer afternoon playing beloved records while dinner simmers away in the kitchen.

What becomes even clearer with this recording is how well Marston knows how to make music that matches our current cultural moment. The synth-heavy explorations on his 2021 solo recording A Big Beautiful Scary World was the perfect response to the unsettled feeling in so many of us during the heart of the pandemic, and his skittish 2020 track “Sanctuary” mirrored his and many others’ anxiety leading up to the last President election. Blue Butler feels like a balm for anyone trying to make sense of the mixture of emotions being brought on by COVID’s continued spread and a humanitarian crisis unfolding on the other side of the globe. The music is not there to paper over these issues, but instead help give you some small moments of respite and joy.