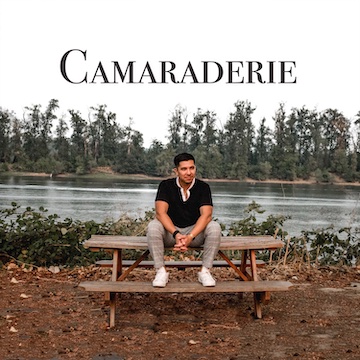 Saxophonist BrandonLee Cierley had a dual purpose in mind when he named his latest album Camaraderie. The title is a nod to the late trumpeter Roy Hargrove, a key influence on Cierley's playing and writing. A centerpiece of Hargrove's 2006 album Nothing Serious was a track called "Camaraderie," a tune which opens with a spurt of free jazz exploration before slamming into pure bop beatdown. Cierley takes an opposite tack on his album's closing cut "Multnomah." The piece announces itself with a measured melody, with the saxophonist doubled every step of the way by trumpeter Justin Copeland. As the song simmers along, the bubbles start to pop on the surface before spilling over in a heated boil of drummer Machado Mijiga's splashy, formless fills and pianist Dario LaPoma's sizzling trills.

"Multnomah" is just one example on this album of what Cierley shares with Hargrove as a composer and a performer. The two share an interest in playing in all manner of styles and modes. Cierley bears that out in his various live performances around the city and in his growing discography that includes hip-hop workouts, neo-soul burners, and unfiltered EDM. On Camaraderie, that spirit comes out as the icy ballad "Solitude" gives way to the crackling Stevie Wonder-like "Open Door" and the abstractions of "Heimdall's Creek." The back half of the record stays more firmly in the jazz lane while still showcase subtle variations from the modal tribute to another fallen icon "Feelin' Like Kobe" and the teasing, tumbling groove of "Baachan."

Perhaps more important than the nod to Hargrove is Cierley's other reason for naming his album as he did. This young musician recognizes that he is part of a larger community of players here in Portland and this record is constructed to emphasize that. Cierley is joined by two different ensembles here, with the first few songs taken up by a crew that boasts trombonist Chris Shuttleworth, keyboardist Dylan Hayes, bassist Nick Morrison, drummer Xavier Lecouturier, and guitarist Martin Budde. (There's even a lovely appearance by Cierley's mom Frances, playing flute on "Solitude.") The rest of the album belongs to Mijiga, Copeland, LaPoma, and bassist Christian Ramirez. Cierley embraces them all, making sure that he's joined on the stems by another horn player. When he solos, the rest of the band stays in focus rather than fading into the background. Cierley rarely seems to want to take center stage, even on an album that bears his name. He leaves the spotlight open for everyone else, from LaPoma's delicate yet intense solo on "Baachan," to a move a la "Lonnie's Lament" from John Coltrane's 1964 album Crescent, where Cierley lets Ramirez have an entire track to himself for a wild two minute bass solo.

Camaraderie is just the latest expression from a jazz community that is hitting its collective stride and about ready to burst in the international consciousness. With an artist like Cierley leading the charge while also pulling up as many of his comrades to join him. there's little doubt that Portland is in good hands right now and will continue to be far into the future.