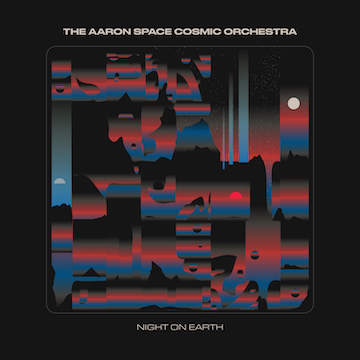 In an era when, due to continually shrinking funding options and pitiful payouts for streams, most independent artists are being forced to maintain a lean operation, releasing a big band album feels like an act of defiance. That kind of provocation appears even stronger when the leader of the large ensemble in question is writing material that looks to evoke the harmony of the spheres with each swelling chord and joyous clash of acoustic and electronic instrumentation.

Night 0n Earth, the debut release by The Aaron Space Cosmic Orchestra (out now via PJCE Records), a group led by drummer Elihu Knowles, aims for the maximalist (the liner notes list 17 different players and vocalists) even in its minimalist form (four tracks that add up to 21 minutes of music). These compositions take on the measured pace and constant growth akin to our expanding universe. The noir-ish “Night Music” builds from a dusky piano melody played by Knowles that is joined by the slow bloom of the horns, while “Hi Speed Chase” lets guitarist Nikhil Wadhwa spurt and splash while the rest of the group — which includes saxophonist John Savage, trombonist Craig Bryant, and pianist Gina Pruitt — bursts brightly like a supernova.

Knowles cites recordings like The Black Saint and the Sinner Lady and Ellington’s Black Brown & Beige as inspirations for the scale of Night 0n Earth. But Knowles scrambles those sacred foundational texts in much the same way as he replaces the “o” with a zero in the title of the album.

The music is cluttered with the space junk of modern synthesis and digital recording techniques. At the halfway point of closing track “Where We’re At,” he introduces a looping sound that could be a digitized whip crack or fingersnap that forces the musicians to conform to its rhythm. “In Da Club” (not the 50 Cent tune, for what it’s worth) is almost dominated by a squirrely programmed rhythm. It plays well off the cockeyed melody of the horns, but like much of the other treatments Knowles applies to the recordings, it has the potential to distract and agitate depending on the setting in which the album is playing.

Knowles’ ambition is noted and very much appreciated on Night 0n Earth but it does seem like he could have gone further. Either drifting deeper into the reaches of the avant garde as he does with his other project Aaron Space & his Terrestrial Underlings, or simply daring to pile more songs onto this one album. The jazz cosmos is infinite. He shouldn’t shy away from exploring as much of it as he can.