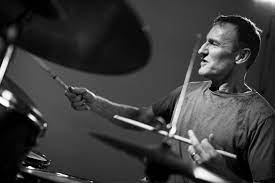 Alan Jones deserves to sound as relaxed and in reponse as he does throughout his latest album You Took Me Home. The drummer and educator is one of Portland’s busiest jazz artists, playing regularly throughout the city when he’s not shepherding new talent through the Alan Jones Academy of Music and private instruction.

It’s hard work that Jones revels in, which is why the mood of Home — the musical equivalent of a deep contented sigh — feels entirely earned. As does the working vacation that the drummer and his collaborators on the album took to record the album. The sessions were captured far away from home in a barn in Ardèche, France, owned by Francois Théberge, a longtime cohort of Jones who plays tenor sax and trombone on Home.

The setting had an audible influence on how at ease everyone sounds throughout these recordings. On “What The Painter Saw,” pianist Olivier Truchot plays with graceful downstrokes, as if coaxing the sounds from his instrument, while Théberge and tenor saxophonist Nicole Glover trade-off solos that flicker like candlelight. “The Sky Is Not The Limit” finds Jones and bassist Jon Lakey settling into a cozy, swaying groove that seems to warm the air.

The glow at the core of this album comes from Jones’ intent to write a suite of songs all about the people and places that have impacted him throughout his life. Family members. Friends. The street where Jones grew up and to which he returned when he purchased his childhood home. Or he uses the title of the album as a beacon in his compositions, with the bone deep exhaustion of “Walk Away,” a piece that Jones says, “is about having the courage to… find your way back,” seeping through the song’s syrupy rhythm.

In the notes for You Took Me Home, Jones acknowledges that he’s made an album for very specific moments. “It is music to have on when you are eating in good company,” he writes, “eating alone, spending time with people you love…” This is, in other words, background music. This feels like a damning phrase to apply to an album as lovely as this, even though it’s an honest assessment of a collection of instrumental ballads.

Home is meant to keep the listener’s attention when they pay attention to it and fade into the distance when they’re not. During this complicated period of our collective history, the reassuring atmosphere of Jones’ compositions here might be the ideal everyday soundtrack. Once things get back to normal, however, I’m not convinced it will stay in the regular rotation. Much like the towns and dwellings that we grew up in, we may not return to Home frequently, if at all, but isn’t it nice to know it’s still there?