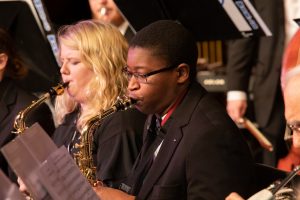 The Clark College Jazz Band under the direction of Dr. Doug Harris presents its “Winter Concert” on Saturday, March 7, 2020, 7:30 pm in Gaiser Student Center on the campus of Clark College. Admission to the performance free and open to the public. Donations to the Clark College Music Department are welcome at the door.

“On the heels of a very successful 58th Annual Clark College Jazz Festival, we’re excited to have the opportunity to explore some new music,” says Dr. Harris. “This is a new performance in our schedule, and it’s exciting to push to a new performance with only five weeks to prepare. It really keeps us on our toes!”

For complete information about all the Clark College Music Department concerts including the orchestra, concert band, jazz band, and choirs, please seehttp://www.clark.edu/campus-life/arts-events/music/music-concerts.

Dr. Harris received his Bachelor of Music Education from the University of Florida, his Master of Arts and Doctor of Arts from the University of Northern Colorado.  His conducting teachers include Richard W. Bowles, Dr. Raymond Chobaz, Dr. German Gutierez, Dr. Richard Mayne and Dr. Kenneth Singleton, and has studied with Douglas Akey, Stanley Derusha, John Paynter and Frank Batiste.  At his most recent high school, Palm Bay High School in Melbourne, FL., his concert and jazz bands were recognized as being among the elite in the state, regularly receiving highest marks at district and state festivals.  The Wind Ensemble was invited to perform at the University of Florida Invitational Concert Band Festival as well as the prestigious Bands of America National Concert Band Festival in Indianapolis.  The top jazz band performed at, and won, jazz festivals in Florida, Georgia and Virginia, and has earned praise while performing with jazz notables such as Ira Sullivan, Bill Prince, Marc Dickman, Christian Tamburr, Maynard Ferguson, David Steinmeyer, Bobby Shew and Portland’s own Charlie Porter.

Partner with the Society