Drummer Cory Limuaco Plays Like It's the Last Time, Every Time 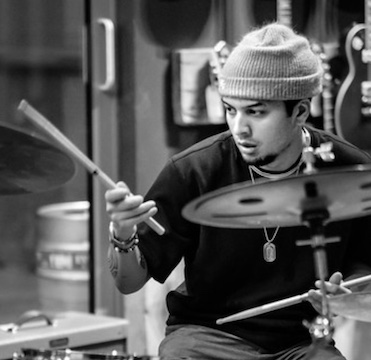 Jazz musicians, at their best, love to dangle off a cliff, with only their wits and their fingertips holding themselves and whatever song they’re playing from complete disaster. Especially in a live setting, it’s a constant resetting of their creative boundaries, pushing up to and just beyond the edge every time.

Few players in Portland embody that concept better than drummer Cory Limuaco. He throws his full self into every performance, whether that’s working in the cosmic realm of Mae.Sun, blending neo-soul and fusion as a member of greaterkind, backing up superstar rapper Aminé, or deconstructing jazz and pop favorites with his own ensemble. He’s a daredevil with a fluid sense of time and a splashy attack who, as he put it on a recent Instagram post, plays “like it’s my last time, every time.”

That attitude has kept Limuaco in high demand among the various music communities in Portland since he began playing live about six years ago. And his flexibility allowed him to come out of the COVID lockdowns at full speed as evidenced by his recent performances at Mississippi Studios with trumpeter Noah Simpson and his frequent appearances at The 1905.

As he is returning to latter venue on Saturday for two sets leading a quartet that includes fellow musical risk-takers Simpson, keyboardist Charlie Brown III, and bassist Garrett Baxter, we caught up with Limuaco on a break from his day job to get the full story of where he came from as a drummer and what challenges he wants to face next.

The last couple of years, even amid the pandemic, have been pretty busy for you. You got married and have your first kid on the way. And you’ve been playing live quite a bit. How has it been to juggle all those responsibilities?

It’s definitely been a “learning as I go” type of thing. Balancing different types of work is never easy. I think it’s really important to make sure you’re holding yourself accountable when you have a lot of things going on. Making sure you have clear expectations for yourself and setting your goals. Going into this new year, sync licensing is a big goal of mine. I devote a lot of energy and time to making music within that realm. Then with the family stuff, that’s all completely new to me. It’s been quite a crazy couple of years, but I’m super grateful because I have a wife who is just as motivated as I am to make things happen in our family life. It makes it really easy to progress.

Tell me more about this idea of writing with sync licensing in mind. I know that’s a great way for musicians to make a decent living, but how do you approach that? How do you put yourself in the mindset of writing for that purpose?

Right now what I’m doing is a lot of market research in regards to what’s trending musically right now, as well as talking to people in my circle who are already in the sync licensing game. To get what inside insights they have as far as how to create music in that realm and workflow. But then also doing my own legwork and figuring out what works best for me in the writing process. Writing with a clear goal in mind and a clear intent is what I like to do. A lot of times when you’re targeting a specific market or a specific ad that you’re trying to get placed in, it’s a little bit easier in my eyes to go down that avenue quickly because you already have a template to work off of rather than starting from a clean slate, like writing a song to release on an album.

How much have you been able to get that work done and how much of the music you’re writing is for your trio or for greaterkind?

Actually, just recently greaterkind got hit up to do a couple of things here in the coming months so we’re actually starting to revamp our writing and get back together. A lot of us in the group are super busy. Peter [Knudsen], the guitarist, is out of town a good amount. Charlie [Brown III, keyboardist] is fairly busy with his life, too. So we all try to get on a schedule together as well as creating stuff on our own. We recently got together in the studio and made a couple of things. As far as my trio stuff goes, a lot of that is just a reflection of what I like to listen to. Not necessarily that I have a lot of originals in stock, but more of a vibe to play things I align with musically and then create them in my own way in a live setting whether that’s a Robert Glasper tune or an Oscar Peterson tune.

To go back to the beginning, what got you started playing drums?

I was born and raised in Guam. My mom was a singer and ended up making a professional career on the island doing what I’m doing here: playing live gigs fairly often and connecting with the music scene. As the story goes when she was pregnant with me and would be singing, I would keep the rhythm or tempo of the songs she was singing in her belly. So I like to say I started from the womb. I didn’t actually start playing drums until I was four. That’s when I got my first drum set. I fell in love with it immediately.

What sort of music was your mom singing?

She grew up doing jazz and musical theater. Her band did a lot of rock and some jazz fusion with elements of R&B. A triage of different styles. That’s how I like to think of myself: a person who isn’t subject to a single style and who has respect and actually loves playing all different styles of music.

Were there drummers that inspired you as you were coming up?

When I was a young kid, I loved to play rock and more heavy stuff. I was really big on Journey and Rush and Boston because that’s what my parents listened to around the house. So really Neil Peart was probably the first drummer that I really started studying from a YouTube perspective. Looking at videos and finding new videos of him. As I got older, I turned more into jazz.

How did you wind up here in Portland?

I have a lot of family that was from Guam that ended up moving here for work reasons. My parents knew they wanted to come to the States and start a different life for us. It was between here and Denver. I think there was some sort of hold up with licensing from my mom’s job in Denver but not here so we ended up choosing Portland as our home base and fell in love immediately. My parents wanted to get us into a good school system that had a good music program.

Who did you study with when you got here?

Before I left the island, I had a private instructor who went by the name of Ching who showed me everything I know in terms of basic, rudimentary skills. When I got here, I did a lot of playing on my own to start. Then Greg Hall, the Sunset High School jazz band director, came to my middle school, which was a feeder school for Sunset, and I was in the jazz band. I would say he was mainly the biggest instrumental piece in exposing me to the world of jazz. The world of small groups, fusion, R&B, ECM.

When did you start playing shows outside of school?

I guess in my eyes, I started kind of late compared to most of my peers. I went through all of high school and up to my junior year of college [at Portland State University] until I got my first gig in Portland. So 2016 was the first year that I played out. Which I think was good for me because I didn’t feel confident enough in my own ability. I needed time to cultivate my confidence and know what my sound is.

How would you characterize your sound at that time?

Early on, I was being exposed to a lot of different music that fed into my jazz playing subconsciously. As a student, I was really looking to fully dive into that jazz world and model myself after people that I looked up to. Brian Blade was a big one. Philly Joe Jones. Jack DeJohnette. All those heavy hitters who did some crossover into the ECM fusion world but also stayed true to the tradition of jazz.

How would you describe your sound now?

After I got out of college, there was a big shift in the listening that I did. I did a bit of a 180 and started doing a lot more hip-hop. I went on a tour with Aminé. I went on tour with Jarrod Lawson which had a Latin/R&B, kind of D’Angelo vibe. I put myself in situations to grow and learn and get experience at different types of music. That showed me that the education I got within jazz school is totally applicable to other styles of music and can give you a newfound respect for those styles of music.

One aspect of being a drummer in our modern era is embracing technology. You seem to have done that well as I’ve seen you performing with a laptop and other triggers. Was that a very comfortable thing to start adding to your arsenal?

I would say it’s necessary these days. It’s the industry standard in church situations and other musical situations where there’s backing tracks. A lot of the time, the drummer is the one responsible for cueing those tracks and getting the song rolling. It all takes time but it’s where the music is heading these days for live performance. It’s definitely an asset to be able to bust that out.

There seems to be an influx of young talent on the Portland jazz scene these days, which has been really exciting to see. How does it feel to be one small part of that?

What we try to do as “younger” jazz musicians is reimagine what jazz means to us. The people of our age group all grew up with different influences. Our influences come from pop and hip-hop and the music of the time. I know for other people like Charlie and Noah Simpson, the word “jazz” means music that we’re able to create and make our own whether that’s from a traditional standpoint or from a contemporary standpoint or even when it doesn’t have anything to do with the word “jazz.” I like to push those boundaries and stir them up and make them my own. Us young guys out on the scene are stirring the pot as to what jazz really is.