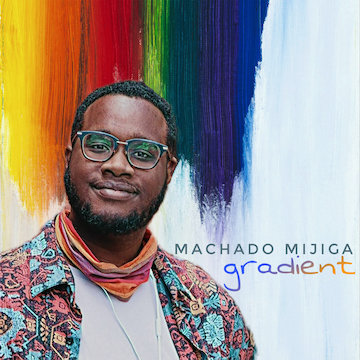 One of the best ways to make a career out of being a jazz musician in a market as relatively small as Portland is to be as flexible as possible — able to play more than one instrument, willing to play in whatever style or at whatever venue is available at any given day.

No player embodies that better than Machado Mijiga. Since arriving in Portland in 2018, the 27-year-old musician has stayed on the move, utilizing his skills as a drummer, saxophonist, and keyboardist as a bandleader and as a sideman for Darrell Grant, guitarist Mike Gamble, trumpeter Cyrus Nabipoor, and saxophonist Nicole McCabe. As seriously as Mijiga takes each gig and each recording session, music remains his play place; a constantly replenishing supply of raw material from which to build his colorful sonic structures.

For his latest album Gradient, Mijiga is returning the favor by calling upon a baker's dozen of musicians that he has collaborated with over the years to record his original compositions. There are regular hands joining his rhythm section as the tracks feature either pianist Dario LaPoma and bassist Andrew Jones, or Dylan Hayes and Garrett Baxter filling those same roles, repsectively. But otherwise, the lineup shifts from song to song, a savvy move in keeping with the changing tone and color of the album.

The title track revolves around a hooky melodic phrase a la Grant Green, but the rest of the music bashes forth in a postmodern mode. Grant and guitarist Jack Radsliff work as both steadying hands and pot stirrers as they harmonize and bounce solos off one another. "Adversary" adds a bounce to the mix, with Mijiga and pianist George Colligan providing a sponginess that easily absorbs and adapts to Noah Simpson's gooey, exploratory solo. Later, "Back Home" sends the complicated, yet warm feelings of its title through a gauzy, ECM-like filter with its clean lines and palpable negative space.

Mijiga's clear vision as a composer, though, is made fuzzy throughout Gradient by his own hands. He can be a busy drummer, jumping frequently to polyrhythmic snare patterns and fills that muss up the otherwise finely honed edges. Sometimes that motion is put to great use, like on "Solace," a song that rides a rev then idle sequence that brings a fascinating tension to fore. But his playing on opener "21cc" and "Rembrandt" sounds a touch sloppy, pulling focus away from the full picture.

It's a shame as the album is, overall, a lovely, textured self-portrait from this multi-faceted artist. And maybe that's why he chose not to bother patching up any rough spots on Gradient, and it should be seen instead as a healthy embrace of the flaws and missteps that are part of being human. Or he's simply left those in to smudge the rose-colored glasses through which he's viewing the "strong memories or emotions" that, according to the liner notes, inspired much of the music.